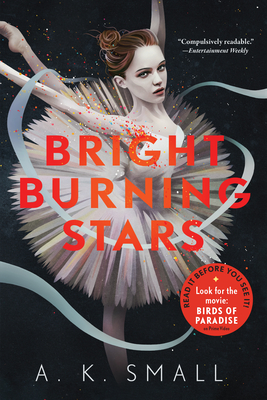 Kate and Marine are 1st division dancers- less than one year away from winning The Prize, to be named the school's number one dancer (I think?). This book deals with a lot of difficult and complex issues including eating disorders, suicide, abortion, and depression. However, I think the book does do a good job of showing all of this through the two characters, as well as through the lives of high level ballet students. Of the two perspectives, I really enjoyed Marine and her arc. I thought her character was very well developed and I actually liked how much of her motivation was based off of her deceased twin. I also really liked a lot of the supporting characters, especially Luc and Little Alice. I think the author did a good job of showing the characters change/growth over the book (as it covers a school year). I don't know a lot about the world of competitive ballet, but the author very obviously understands that world and the dance itself, the descriptions were really amazing. I also thought that the setting was well done, as I really felt Paris and the school itself, Nanterre. I was pretty satisfied with the ending. I would recommend this book to people who enjoy reading about dance and the complexities of friendship.

“A compulsively readable story. I was breathless and battling tears up until the very last stunning turns onstage and beyond. A dazzling, heart-wrenching debut.” —Nova Ren Suma, #1 New York Times bestselling author of The Walls Around Us

Would you die for the Prize?

Best friends Marine Duval and Kate Sanders have trained since childhood at the Paris Opera Ballet School, where they’ve forged an inseparable bond through shared stories of family tragedies and a powerful love for dance. When the body of a student is found in the dorms just before the start of their final year, Marine and Kate begin to ask themselves how far they would go for the ultimate prize: to be named the one girl who will join the Opera’s prestigious corps de ballet. Would they cheat? Seduce the most talented boy in the school, dubbed the Demigod, hoping his magic will make them shine, too? Would they risk death for it? Neither girl is sure.

But then Kate gets closer to the Demigod, even as Marine has begun to capture his heart. And as selection day draws near, the competition—for the Prize, for the Demigod—becomes fiercer, and Marine and Kate realize they have everything to lose, including each other.

Bright Burning Stars is a stunning, propulsive story about girls at their physical and emotional extremes, the gutting power of first love, and what it means to fight for your dreams.

A. K. Small was born in Paris, France. At five years old, she began studying classical dance with the legendary Max Bozzoni, then later with Daniel Franck and Monique Arabian at the famous Académie Chaptal. At thirteen, she moved to the United States, where she danced with the Pacific Northwest Ballet for one summer and with the Richmond Ballet Student Company for several years. She’s a graduate of the College of William and Mary and has an MFA in fiction from Vermont College of Fine Arts. When she’s not writing, she spends time with her husband, her puppy, and her three daughters, and practices yoga. Bright Burning Stars is her first novel.

“A.K. Small’s debut novel, Bright Burning Stars, is basically YA catnip . . . Small’s attention to detail—the minutiae of Marine and Kate’s lives in the academy—is beautifully written, and both the propulsion of the drama between Marine and Kate and their own demons make this book compulsively readable. Small only leaves you wanting more from her ballet-focused world.”
—Entertainment Weekly

“Cutthroat ballerinas duking it out really never gets old.”
—Cosmopolitan

“With prose that is otherworldly at times, Small captures the disintegration of a friendship within a high-pressure world. A cerebral debut that will appeal to readers—and there are more than a few—interested in the cutthroat ballet universe.”
—Booklist

“Debut author Small, herself a dancer, brings authenticity (fascinating day-to-day details abound) to what it takes to flourish or wither amid the soaring highs and crushing lows of a competitive dance school while sensitively exploring the girls’ many emotional and physical extremes . . . Addictive, angst-y, and heartfelt.”
—Kirkus Reviews

“Small, a trained ballerina, infuses her novel with dance terminology and French phrases, giving the reader a sense of the milieu. And while much of the focus of this novel is dance, the heart of the story is about the lengths one will go to realize a dream.”
—Publishers Weekly

“A fascinating and dramatic view of the world of young ballet dancers.”
—Pittsburgh City Paper

“This is a story filled with interesting plot twists sure to maintain a high level of interest for readers.”
—School Library Journal