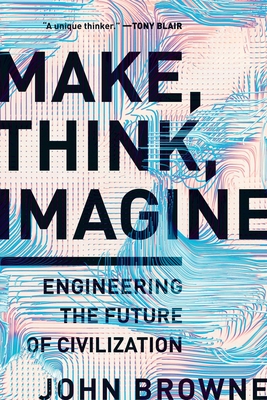 
Available to Order - Usually Arrives in Our Store in 4 to 7 Days
An impassioned defense of progress and innovation—and an argument for social responsibility from engineer, businessman, and former CEO of BP Lord John Browne.

Today's unprecedented pace of change leaves many people wondering what new technologies are doing to our lives. Has social media robbed us of our privacy and fed us with false information? Are the decisions about our health, security and finances made by computer programs inexplicable and biased? Will these algorithms become so complex that we can no longer control them? Are robots going to take our jobs? Can we provide housing for our ever-growing urban populations? And has our demand for energy driven the Earth's climate to the edge of catastrophe?

John Browne argues that we need not and must not put the brakes on technological advance. Civilization is founded on engineering innovation; all progress stems from the human urge to make things and to shape the world around us, resulting in greater freedom, health and wealth for all. Drawing on history, his own experiences and conversations with many of today's great innovators, he uncovers the basis for all progress and its consequences, both good and bad. He argues compellingly that the same spark that triggers each innovation can be used to counter its negative consequences. Make, Think, Imagine provides an eloquent blueprint for how we can keep moving towards a brighter future.
John Browne trained as an engineer, was CEO of BP from 1995 to 2007, and remains an influential leader in the energy business. He is chairman of the Crick Institute, a fellow of the Royal Society and the US Academy of Arts and Sciences, and former president of the Royal Academy of Engineering and former chairman of Tate. He is a collector of antique books and the author of four previous titles, including The Glass Closet: Why Coming Out is Good Business and Seven Elements that Changed the World, also available from Pegasus Books. John lives in London.

"A tribute to engineers like Rousseau, the tribe of pragmatic creators who, Mr. Browne says, are ‘at the heart of all human progress.’ Mr. Browne has created a sturdy and useful product, achieving the engineer’s blend of ‘hopefulness and pragmatism’ that he so deeply admires."
— Wall Street Journal

"A thoughtful analysis of today's unprecedented pace of change and what the future may hold."
— Kirkus Reviews

"Browne takes readers on a fascinating yet practical intellectual journey into both past and future technologies, focusing on the technologies most likely to benefit humankind…The author's interviews and personal experiences make this material come alive. The occasional diagrams and black-and-white images surely enhance understanding, and researchers will definitely appreciate the voluminous notes, chock-full of detailed explanations, as well as the comprehensive index featuring numerous detailed sub-entries. Summing Up: Highly recommended. All readers."
— CHOICE

"Browne views engineering as inherently translational.  He describes engineering as ‘a head with two sets of eyes: one looks to the fruits of discovery, while the other looks to the demands of commerce and customers.’ A pivotal moment in Browne's career trajectory, he said, was his realization that ‘no solution was complete unless it resulted in something practical that humanity wanted."
— Forbes

"An ode to the ways in which engineering has improved human civilization.”
— John Hennessy, Chairman, Alphabet

"The human quest for knowledge has led to extraordinary progress. This book forces us to confront these realities and does so in a unique and fascinating way. It weaves science and humanity together in a way that gives us new insight. This is an expertly crafted book by a unique thinker."
— Tony Blair