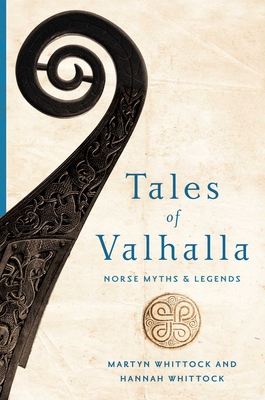 
Available to Order - Usually Arrives in Our Store in 4 to 7 Days
A vivid retelling of Norse mythology that explores these legendary stories and their significance and influence on the Viking world.

Valhalla and its pantheon of gods and heroes have always fascinated readers, whether it is how these tales illuminate the Viking world or influence cultural touchstones like J. R. R. Tolkien, whose Middle Earth is heavily indebted to Germanic and Norse mythology, as well as Hollywood and comics culture.In Tales of Valhalla, the Whittocks have dramatically retold these rich stories and set them in context within the wider Viking world. Including both myths—stories, usually religious, which explain origins, why things are as they are, the nature of the spiritual—and legends—stories which attempt to explain historical events and may involve historical characters but are told in a non-historical way and often include supernatural events—Tales of Valhalla is an accessible and lively volume that brings these hallmarks of world literature to a new generation.
Martyn Whittock has written numerous educational and history books, including titles on Viking and Anglo-Saxon history. He has been a consultant for the BBC, English Heritage and the National Trust and has written for Medieval History magazine and other archaeological journals. He lives in Oxford, UK.

Hannah Whittock has a Masters of Philosophy from Cambridge in Anglo-Saxon, Norse, and Celtic studies. She has co-written three books on Viking and Anglo-Saxon history and has written journal articles on Anglo-Saxon frontiers and coinage produced during the Viking Wars. She reads Old English and Old Norse.
Authors Martyn Whittock and Hannah Whittock have clearly done their homework and have a wonderful understanding of the stories. Their writing is vivid and lively, and they really transport readers to another time and place filled with magic and mayhem and miscreants and monsters. A great addition to any library, personal or public.