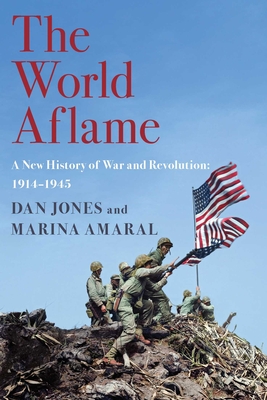 
On Our Shelves Now
A bestselling historian and a brilliant artist have combined their talents to create a stunning visual history of global war and revolution from 1914 to 1945.

Dan Jones and Marina Amaral tell the epic, harrowing, and world-changing story—in narrative form with colorized images—of global conflict from the assassination of the Archduke Franz Ferdinand to the obliteration of Hiroshima by the first atom bomb.

The World Aflame embraces not only the total conflagrations of 1914-1918 and 1939-1945 and the tensions, ideologies and economic forces that set them in motion, but also the revolutions in Russia; civil wars in Ireland and Spain; American interventions in Latin America, colonial wars in Morocco, Ethiopia, and Palestine; and events on the domestic ‘fronts’ of the belligerent nations.

A fusion of amazing pictures and well-chosen and informative words, The World Aflame offers a moving—and often terrifying—perspective on the bloodiest century in human history.
Dan Jones is a historian, broadcaster, and award-winning journalist. His New York Times bestselling books include The Plantagenets, Magna Carta, and The Templars. He writes a weekly column for the Evening Standard and his writing also appears in the Wall Street Journal, Smithsonian, GQ, and the Spectator. He lives in Surrey, England.

Marina Amaral is a talented Brazilian artist who specializes in the colorization of historical photographs. Together, she and Dan Jones are the authors of The Color of Time, also available from Pegasus Books. She lives in Brazil.
“An image-driven history of the tumultuous period between and including the world wars. Fans of the companion volumes to Ken Burns’ film series will find this a familiar, and worthy, approach.”
— Kirkus Reviews

"Fast-paced and accessible. The old-fashioned storytelling will be particularly appreciated by those who like their history red in tooth and claw."
— The Wall Street Journal [praise for Dan Jones]

"Jones has brought the Plantagenets out of the shadows, revealing them in all their epic heroism and depravity. His is an engaging and readable account and researched with exacting standards. Compelling reading."
— The Washington Post [praise for Dan Jones]

"Outstanding. Majestic in its sweep, compelling in its storytelling, this is narrative history at its best. A thrilling dynastic history of royal intrigues, violent skullduggery, and brutal warfare across two centuries of British history."
— Simon Sebag Montefiore, New York Times bestselling author [praise for Dan Jones]