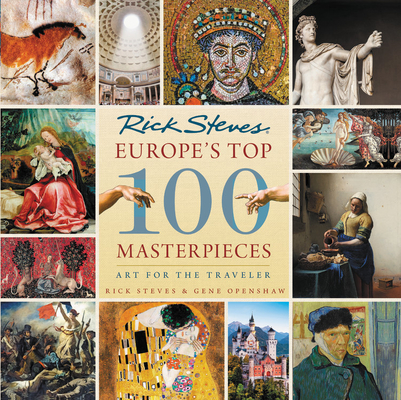 
On Our Shelves Now
Explore Europe's top 100 works of art with America's most trusted travel authority, Rick Steves.
Travel through time and discover Europe's most iconic paintings, sculptures, and historic buildings. From Venus to Versailles, Apollo to David, and Mona Lisa to The Thinker, Rick and co-author Gene Openshaw will have you marveling, learning, and laughing, one masterpiece at a time.
Whether you're traveling to Europe or just dreaming about it, this book both stokes your wanderlust and kindles a greater appreciation of art, with historical context and information on where to see it for yourself.
With Rick's trusted insight and gorgeous, full-color photos throughout, Europe's Top 100 Masterpieces celebrates nearly 20,000 years of unforgettable art.
Since 1973, Rick Steves has spent about four months a year exploring Europe. His mission: to empower Americans to have European trips that are fun, affordable, and culturally broadening. Rick produces a best-selling guidebook series, a public television series, and a public radio show, and organizes small-group tours that take over 30,000 travelers to Europe annually. He does all of this with the help of more than 100 well-traveled staff members at Rick Steves' Europe in Edmonds, WA (near Seattle). When not on the road, Rick is active in his church and with advocacy groups focused on economic and social justice, drug policy reform, and ending hunger. To recharge, Rick plays piano, relaxes at his family cabin in the Cascade Mountains, and spends time with his son Andy and daughter Jackie. Find out more about Rick at www.ricksteves.com and on Facebook.
Connect with Rick:
facebook.com/RickSteves
twitter: @RickSteves
instagram: ricksteveseurope
Gene Openshaw has co-authored a dozen Rick Steves books, specializing in writing walks and tours of Europe's cities, museums, and cultural sites. He also contributes to Rick's public television series, produces tours for Rick Steves Audio Europe, and is a regular guest on Rick's public radio show. Outside of the travel world, Gene has co-authored The Seattle Joke Book. As a composer, Gene has written a full-length opera called Matter, a violin sonata, and dozens of songs. He lives near Seattle with his daughter, enjoys giving presentations on art and history, and roots for the Mariners in good times and bad.