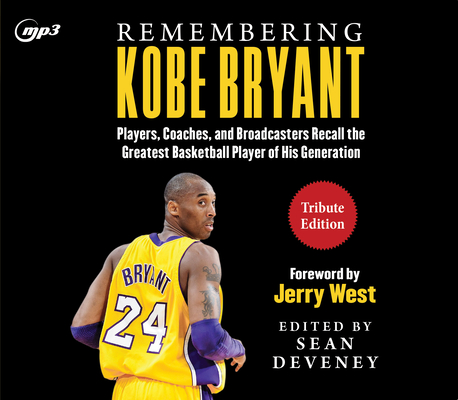 Let Stephen Curry, Charles Barkley, Grant Hill, Reggie Miller, and more, tell you what it was like to take the floor against one of the Greatest of All Time. With a Foreword by Jerry West, and a new tribute from the author about Kobe’s tragic death.

When he entered the NBA in 1996 as a high-school star from Lower Merion, Pennsylvania, Kobe Bryant faced enormous expectations. No one can deny that he rose to the challenge. Today Bryant’s status as a future Hall of Fame player is assured. During his stellar career, Bryant won five NBA championships; was a seventeen-time All-Star, NBA MVP, and two-time NBA Finals MVP. He led the league in scoring in 2006 and 2007.

Now for the first time, hear stories from opponents, teammates, and players about what it was like to go against Kobe in Remembering Kobe Bryant. Contributors include:
Chris Webber
Jeff Van Gundy
Rick Barry
Doc Rivers
Dwayne Wade
Draymond Green
Giannis Antetokounmpo
Russell Westbrook
Carmelo Anthony
And many more
Kobe Bryant was the greatest basketball player of his generation—a former schoolboy prodigy whose moves are now imitated in gyms and playgrounds around the world. Remembering Kobe Bryant provides an unprecedented glimpse into what it was like to play against one of the best of all time.

Sean Deveney has been a writer and editor at Sporting News since 1999, covering all aspects of sports. He has authored four books, including The Original Curse, Facing Ted Williams, and Before Wrigley Became Wrigley.