Black Liberation Through the Marketplace: Hope, Heartbreak, and the Promise of America (Paperback) 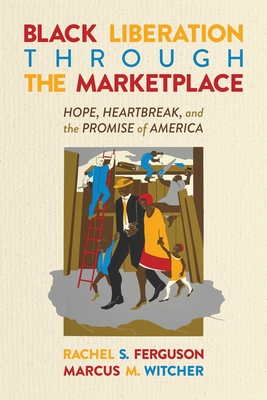 Black Liberation Through the Marketplace: Hope, Heartbreak, and the Promise of America (Paperback)

In this book, we use the classical liberal lens to ask Americans on the political right to seriously reckon with America’s deep racial pain—much of which arises from violations of rights that conservatives say they deeply value, such as property rights, freedom of contract, and the protection of the rule of law. We ask those on the left to take a hard look at the failed paternalism, and in some cases, thoroughgoing racism of past progressive policy. All Americans are asked to apply their concern for individual rights and constitutional order fairly to our historical record. What readers will find are deep injustices against black Americans. But they will also find black entrepreneurs overcoming amazing obstacles and a black community that has created flourishing institutions and culture.

Exhausted by extremism on both left and right, a majority of Americans—black and white—love this country and want to do right by all of its citizens. In Black Liberation Through the Marketplace, readers will come away with a better understanding of black history and creative ideas for how to make this nation truly one with liberty and justice for all.
Rachel Ferguson is an economic philosopher at Concordia University Chicago. As director of the Free Enterprise Center there, she leads a nationwide, cross-disciplinary faculty network that engages questions of liberty and virtue through seminars, conferences, and pedagogy. Dr. Ferguson has been a visiting fellow at the Eudaimonia Institute and her work can be found in Discourse, the Journal of Markets & Morality, and the Library of Economics and Liberty. Ferguson lives in St. Louis, Missouri where she is actively involved in community building and empowering marginalized entrepreneurs through LOVEtheLOU and Gateway to Flourishing.

Marcus M. Witcher is an Assistant Professor of History at Huntingdon College in Montgomery, Alabama. He received his BA from the University of Central Arkansas in 2011, an MA from the University of Alabama in 2013, and completed his Ph.D. in history from UA in 2017. His first book, Getting Right with Reagan: The Struggle for True Conservatism, 1980-2016, was published by the University Press of Kansas in 2019. Dr. Witcher is also the co-editor of the three volume Public Choice Analyses of Economic History (2018, 2018, 2019) and is the co-editor of Conversations on Conservatism: Speeches from the Philadelphia Society (2021).
“America is in desperate need of a new conversation about Black socio-economic mobility that takes the failures of American history and realities of Black excellence seriously in light of the civil society institutions that make it all possible. This book is the beginning of that conversation. Ferguson and Witcher provide us with the very principles of economic and political liberty that, if applied, would end cycles of poverty for so many living in disadvantaged communities. It’s historically honest, wonderfully insightful, and immensely practical.”
— Anthony B. Bradley, author of "The Political Economy of Liberation"