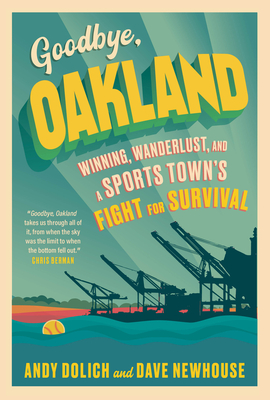 
Coming Soon - Available for Pre-Order Now
A fascinating tour of Oakland sports history and a look toward the future of professional sports in the East Bay.

Oakland is a sports city like no other. It is the only city in America to be abandoned by the same team twice, with the Raiders most recently leaving for Las Vegas. The Golden State Warriors, who crossed the bay in 1971 in search of better digs, have now returned to San Francisco with trophies in tow. The long-fought battle to keep the Oakland Athletics in the East Bay may narrowly save the city from a hat trick of departures.

And yet, Oakland has produced more than its share of success in the form of 10 national titles across the NFL, NBA, and MLB. The city is gritty, gutsy, and self-preserving, with a blue-collar mentality and a gold standard under that collar. Bolstered by the Silicon Valley tech boom, Oakland has become one of the most desirable places to live in the entire country, all while its sports fans increasingly find that, in the famous words of Gertrude Stein, "There is no there there."

What is it about Oakland that inspires such wanderlust in its professional teams? Featuring numerous conversations with luminaries across sports, politics, and economics, this new book explores Oakland's fascinating and paradoxical identity as a sports town while illuminating a cast of characters as diverse as the city itself: rogues, superstars, movers and shakers operating on and off the field, and, of course, the fans.

Through the insight of venerated Oakland Tribune scribe Dave Newhouse and sports business leader Andy Dolich, readers will come to appreciate the many quirks and challenges that define "The Town."
Dave Newhouse has observed the Bay Area sports scene since the 1940s. He was an award-winning sportswriter-columnist for the Oakland Tribune, a forerunner among radio sports talk show hosts in San Francisco, and is the author of 19 books. He lives with his wife, Patsy, an artist, in Oakland.

Andy Dolich has spent more than five decades in the professional sports industry, including executive positions in the National Football League (NFL), National Basketball Association (NBA), National Hockey League (NHL), and in Major League Baseball (MLB). He is currently EVP of FCF (Fan Controlled Football) and president of Dolich Consulting. Dolich teaches sports business at Stanford’s School of Continuing Studies. He is a columnist for the Ultimate Sports Guide, the co-host of podcast Life in the Front Office, and co-author of 20 Secrets to Success for NCAA Student Athletes Who Won’t Go Pro and LOL, Loss of Logo: What’s Your Next Move?