Muggsy: My Life from a Kid in the Projects to the Godfather of Small Ball (Paperback) 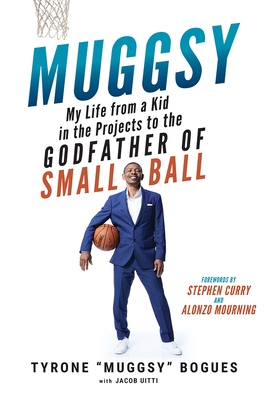 Muggsy: My Life from a Kid in the Projects to the Godfather of Small Ball (Paperback)


Coming Soon - Available for Pre-Order Now
A candid and insightful memoir from one the NBA's most unlikely stars.

Growing up, Muggsy Bogues was always told he should do something else, anything besides basketball. He never acknowledged his many doubters except to prove them spectacularly wrong.

Twenty years after receiving his first basketball as a toddler, he stood proud—at five-foot-three—as the starting point guard for the Charlotte Hornets in the NBA. From the East Baltimore playground courts where he earned his nickname by "muggin'" opponents for possession of the ball, to Dunbar High School where he excelled alongside future NBA players, Bogues set the tone in his early years for the great heights he'd reach professionally.

In this new autobiography, Bogues delves deep into his life and career, reflecting on legendary battles with Michael Jordan, John Stockton, and other generational stars of '80s and '90s hoops. He shares far-ranging anecdotes from playoff runs in Charlotte, filming Space Jam, and even watching a young Steph Curry grow up.

Conversational and clear-sighted, this is a story of uncompromising vision and fleet-footed determination during a golden era for the NBA.
Muggsy Bogues played 14 seasons in the NBA for the Charlotte Hornets, Washington Bullets, Toronto Raptors, and Golden State Warriors.

Jake Uitti is a writer for publications including Interview Magazine, Vanity Fair, American Songwriter Magazine, The Washington Post, and The Seattle Times. He is the author of Northwest Know-How: Beer.