Big Papi: The Legend and Legacy of David Ortiz (Paperback) 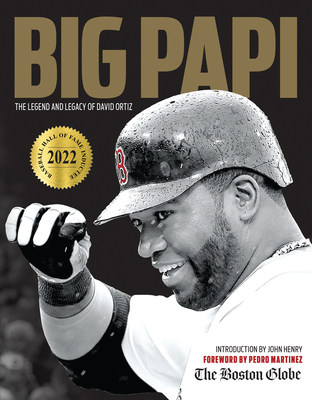 Big Papi: The Legend and Legacy of David Ortiz (Paperback)

By The Boston Globe, John Henry (Introduction by), Pedro Martinez (Foreword by)


Available to Order - Usually Arrives in Our Store in 4 to 7 Days
Celebrate David Ortiz's Hall of Fame enshrinement with this vibrant retrospective.

With more than 500 career home runs, an infectious personality, and three World Series championships, David Ortiz has established his position as one of the greatest Major League Baseball players of this generation.

But Ortiz’ story did not start with postseason heroics and towering blasts into the Fenway Park bleachers. Ortiz struggled to find his power stroke in parts of six seasons with the Minnesota Twins, who released him after the 2002 season.

Following a 2015 season in which he hit 37 home runs at age 39, Ortiz announced that the 2016 season would be his last. Five years later, he became the only player elected to the Baseball Hall of Fame's 2022 class.

Ortiz’ unforgettable career is chronicled in this updated and expanded book from The Boston Globe. Big Papi: The Legend & Legacy of David Ortiz features 144 pages of award-winning reporting, vivid storytelling, dramatic photographs, and exclusive coverage of Ortiz as he prepares for his Hall of Fame induction ceremony.

This one of a kind career retrospective is the perfect souvenir for any Red Sox fan.
TheBoston Globe was founded in 1872 and is the recipient of 23 Pulitzer Prizes. It is based in Boston. Pedro Martinez is a former Red Sox pitcher and 2004 World Series champion who was inducted into the Baseball Hall of Fame in 2015. John Henry is the owner of the Boston Red Sox and TheBoston Globe.