Load the Wagon: The Kansas Jayhawks' Road to the 2022 Championship (Paperback) 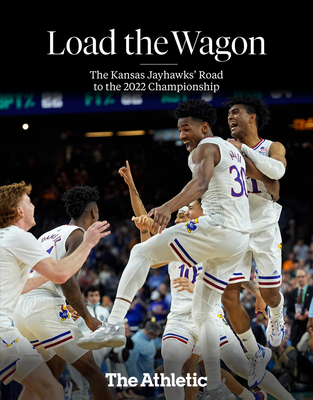 Load the Wagon: The Kansas Jayhawks' Road to the 2022 Championship (Paperback)


Available to Order - Usually Arrives in Our Store in 4 to 7 Days
The Kansas Jayhawks are your 2022 NCAA men's basketball champions!

The Kansas Jayhawks were guided in 2022 by wisdom from the late Bill Self Sr.: "Don’t worry about the mules, just load the wagon." This call to focus on the little things, the fundamentals of their game, paid off on the biggest stage as Kansas captured the national championship for the first time since 2008. Their triumph was the culmination of a demanding regular season and a hard-fought March run. After the what-ifs of 2020 and a disappointing exit in 2021, Bill Self’s squad made their intentions known with wins over Texas Tech and Creighton. Anchored by senior Ochai Agbaji and energized by Remy Martin, they knocked off Providence and then Miami to punch their ticket to a thrilling Final Four matchup against Villanova. Load the Wagon is a celebration of this historic college basketball season, featuring insightful, probing coverage from The Athletic alongside stunning photography, documenting the Jayhawks’ remarkable run all the way up to the ultimate celebration in New Orleans.  This commemorative edition also includes in-depth profiles of Self, Agbaji, Martin and Christian Braun, plus an essential retrospective on the unforgettable 1997 KU team featuring Paul Pierce and Roy Williams.
The Athletic is a subscription-based media publisher of smarter sports coverage for die-hard fans. Founded in 2016, The Athletic’s all-star team of writers have produced thousands of quality stories for subscribers free of ads, pop-ups and auto-play videos. The Athletic now offers in-depth local coverage in 47 North American pro sports markets along with premium international coverage across MLB, NFL, NBA, NHL, NCAA & more. http://theathletic.com