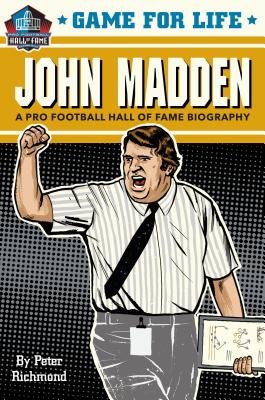 Join the Pro Football Hall of Fame in celebrating the legendary coach, announcer, and video game personality! This new biography is based on interviews with John Madden himself!

Nobody knows more about football than John Madden does. His childhood revolved around sports. When an injury kept him from playing in the NFL, he continued to learn everything he could about football. As head coach of the Oakland Raiders, Madden won more games than any other coach in Raiders history. Then he used his football knowledge as a commentator and the creator of one of the most popular video games ever—Madden NFL. Find out why John Madden is such a beloved member of the Pro Football Hall of Fame!

Game for Life biographies support the Pro Football Hall of Fame's mission to honor the heroes of the game, preserve its history, promote its values, and celebrate excellence everywhere. Don't miss Game for Life: Michael Strahan!

THE PRO FOOTBALL HALL OF FAME, located in Canton, Ohio, the birthplace of the National Football League, is visited by hundreds of thousands of football fans annually. The Hall has enshrined 310 members since its founding in 1963.

PETER RICHMOND is the New York Times bestselling author of 7 books, including Badasses (on John Madden and the 1970s Oakland Raiders). His work has appeared in The New Yorker, The New York Times Magazine, Rolling Stone, and more, and in the anthology The Best American Sports Writing of the Century. Peter's most recent book, Always a Catch, was a YA novel about a high school football player.