The Mermaid and the Minotaur: The Classic Work of Feminist Thought (Paperback) 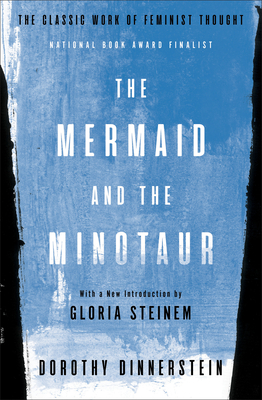 The Mermaid and the Minotaur: The Classic Work of Feminist Thought (Paperback)


On Our Shelves Now
One of the most significant and enduring texts in psychology and gender studies, now with a new introduction by Gloria Steinem.

Since its publication in 1976, Dorothy Dinnerstein’s The Mermaid and the Minotaur has been recognized as one of the most significant contributions to modern feminist thought. The book, translated into at least seven languages, is widely used in women’s studies courses and is an influential text outside academia as well. On a level with Simone de Beauvoir’s The Second Sex, it has remained intensely relevant to a wide audience due to its pioneering message of equality. In this work, Dinnerstein challenges the ideology underlying the female monopoly of childcare and demonstrates the importance of men taking a similarly active role in parenting. A seminal feminist text, The Mermaid and the Minotaur brilliantly integrates feminist theory with Kleinian psychoanalytical theory.
Dorothy Dinnerstein was born in a poor Jewish section of the Bronx, New York, in 1923. As a psychologist, she worked with such luminaries as Wolfgang Köhler, Max Wertheimer, and Solomon Asch. She was a distinguished professor of psychology at Rutgers University for thirty years and lived in New Jersey until her death in a car accident in 1992.

“A feminist classic that issued a call for the fundamental reorganization of society’s gender expectations, especially regarding childrearing…Dinnerstein’s message has become sadly urgent again.” —New York Review of Books

“This book is a game-changer.” —Gloria Steinem, from her introduction

“To the very largest degree this book is exciting and valuable and belongs in every prominent library of feminist thought. Dinnerstein writes beautifully, often eloquently, and she argues brilliantly…a stirring view of the common psychic life of men and women and its relation to the whole of organized human history.” —Vivian Gornick, New York Times Book Review

“The most important work of feminist psychoanalytic exploration thus far. Its re-publication is a celebratory occasion…The book is disturbing—almost frightening—in certain parts of its analysis. Truly facing and understanding its message, however, is an act of liberation.”—Eli Sagan, author of Freud, Women, and Morality: The Psychology of Good and Evil

“A seminal text in the women’s movement.” —Ethel S. Person, author of The Sexual Century

“[The Mermaid and the Minotaur] continues to astonish us with the depth and wisdom of its psychoanalytic approach even as its major ideas have become as unobtrusively essential to psychoanalytic feminism as the atmosphere.” —Jessica Benjamin, author of The Bonds of Love