Golf Is My Life: Glorifying God Through the Game (Paperback) 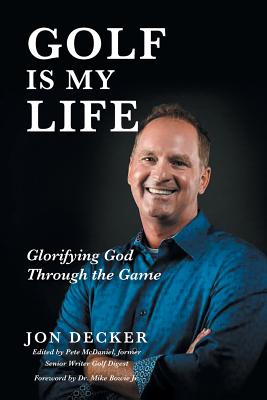 Golf Is My Life: Glorifying God Through the Game (Paperback)

God brought passion into Jon's life at an early age when he saw his very first golf club. This passion turned to love and gave birth to a dream. Fueled by this dream, he worked diligently to one day be a PGA Tour player. However, God's plan for his life did not include professional golf as a participant. Led by the hand of God to a path not foreseen in his childhood dreams, Jon became a teaching professional, teaching the game that he loves.
The game of golf has allowed Jon to play and teach the game while moving in career and social circles unimaginable by a boy who grew up in the mountains of Western North Carolina. This book contains amazing stories and life-changing occurrences in a journey among some of golf's greatest players, world-class athletes, and Hall of Fame coaches. These include:

The pages of this book represent more than the story of Jon's journey and experiences teaching the game. This book was inspired by a supernatural dream that occurred in his life as a teenage boy where he heard the audible voice of God, spoke with his Lord and Savior Jesus Christ and felt the power and fury of the Holy Spirit. His wonderful stories around the game and the unique personal stories of these great players and athletes along with scripture are all woven into a book that will not only grow the game of golf but more importantly glorify God and His son Jesus Christ