Virusphere: From Common Colds to Ebola Epidemics--Why We Need the Viruses That Plague Us (Hardcover) 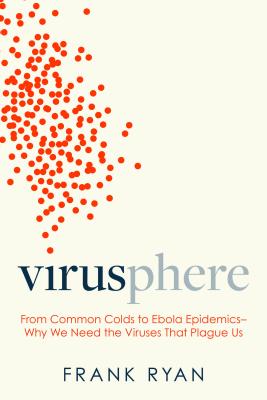 Virusphere: From Common Colds to Ebola Epidemics--Why We Need the Viruses That Plague Us (Hardcover)


Email or call for price. Handling fee may apply.
A fascinating and long overdue examination of viruses - from what they are and what they do, to the vital role they have played in human history.

What are viruses? Do they rely on genes, like all other forms of life? Do they follow the same patterns of evolution as plants and animals?

Dr. Frank Ryan answers these questions and many more in a sweeping tour of illnesses caused by viruses. He examines the common cold, measles, chicken pox, herpes, mumps, and rubella, as well as less familiar maladies, such as rabies, "breakbone fever," hemorrhagic fevers like Ebola, and virus-induced cancers. Along the way, readers will learn about the behaviors of viruses and what drives them to infect a human host. Ryan explains the role of viruses in the evolution of life, revealing how viruses have changed us at the most intimate level, helping to make us quintessentially human.
Frank Ryan is a consultant physician and pioneering evolutionary biologist at the University of Sheffield. He is the bestselling author of The Forgotten Plague--a New York Times Book of the Year--and Darwin's Blind Spot, which was recommended by Charlie Munger at the 2003 Berkshire Hathaway annual meeting. He is also the author of The Mysterious World of the Human Genome, Virolution, and many other books. Ryan was named Honorary Research Fellow in the Department of Animal and Plant Sciences at the University of Sheffield, with the express purpose of developing his evolutionary concepts and helping to translate evolutionary science into medicine. He is a Fellow of The Royal College of Physicians, the Royal Society of Medicine, and the Linnean Society of London.

"A fascinating book that is well structured, with short, absorbing chapters. . . . Virusphere makes an engrossing and fervent argument that he is on to something."