Forever and a Doomsday (A Dru Jasper Novel #4) (Paperback) 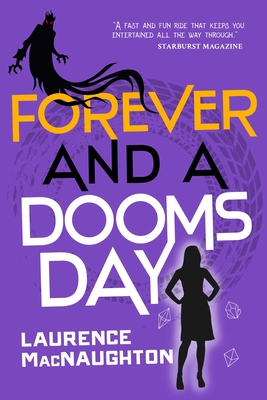 Forever and a Doomsday (A Dru Jasper Novel #4) (Paperback)

This is book number 4 in the A Dru Jasper Novel series.

When insidious spirits from beyond the grave try to get their clutches on the apocalypse scroll, Dru Jasper and her misfit friends are the only hope for stopping doomsday. Crystal shop owner and up-and-coming sorceress Dru Jasper is the unwilling guardian of the apocalypse scroll, an ancient instrument of destruction held in check by the last of seven wax seals. If the forces of darkness manage to break the final seal, the world will come to a fiery end. It's up to Dru to keep the scroll safe. No pressure or anything. When a chilling cohort of soul-devouring wraiths breaks free of the netherworld to get their ghostly fingers on the scroll, it's up to Dru and her friends to stop them. These freakishly evil spirits can kill with just a touch. To fight them, Dru needs a rare crystal older than the Earth itself. Her only hope of finding it is to race to a meteorite crater deep in the desert, with the wraiths right on her tail. But as her friends lose their magical powers to the life-draining evil of the wraiths, the fate of the world hangs in the balance. The only chance to stop doomsday is for Dru to descend into the depths of the netherworld. There, she must unearth the secrets of a lost city and overcome a long-lost enemy from her past. Can she find a way to save her friends and safeguard the scroll forever--before the wraiths break the seventh seal and bring on doomsday?
Laurence MacNaughton is a fantasy writer and the author of No Sleep till Doomsday, A Kiss Before Doomsday, It Happened One Doomsday, The Spider Thief, and Conspiracy of Angels.