No Sleep till Doomsday (A Dru Jasper Novel #3) (Paperback) 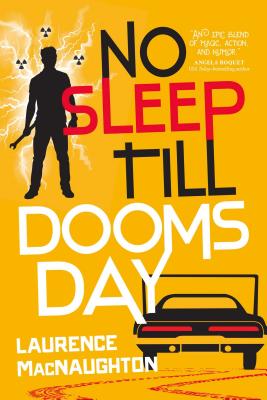 No Sleep till Doomsday (A Dru Jasper Novel #3) (Paperback)

This is book number 3 in the A Dru Jasper Novel series.

An inexperienced sorceress must retrieve a priceless artifact from the enchantress who stole it, break the curse on her half-demon boyfriend, and stop her friends from turning on each other before the enchantress calls down doomsday. When a wicked enchantress steals a cursed doomsday amulet, crystal sorceress Dru Jasper has only twenty-four hours to get it back before the world will come to a fiery end. With this supernatural amulet in hand, the enchantress intends to break the sixth seal of the apocalypse scroll--making the seas boil, the stars fall from the sky, and the earth itself split apart. Overall, bad news. Dru must hit the road to get the amulet back. But she suspects her half-demon boyfriend, Greyson, and his demon-possessed muscle car, Hellbringer, are hiding a dark secret. Can she trust them to help her stop doomsday? Worse, tracking down the enchantress runs Dru smack up against a pack of killer shape-shifters, the grim mystery of a radioactive ghost town, and a dangerous speed demon even more powerful than Hellbringer. As the clock runs out, Dru is locked in a high-speed chase with the enchantress, fighting a fierce, magical duel she can never win alone. Can Dru and her sorcerer friends unravel Hellbringer's secrets, outwit the shape-shifters, and retrieve the stolen amulet before the dawn of doomsday?
Laurence MacNaughton is a fantasy writer and the author of Forever and a Doomsday, A Kiss Before Doomsday, It Happened One Doomsday, The Spider Thief, and Conspiracy of Angels.
“Sharp action scenes and pinpoint plotting keep the pages quickly turning, and crisp characterization and MacNaughton’s obvious passion for intricate detail immerse readers into a terrifying, unforgettable world. Series fans will relish this installment.”

Praise for the series:

“A fast and fun ride that keeps you entertained all the way through its unyielding mayhem.”
—Starburst Magazine

“Comedy, fantasy, and romance blend together smoothly…. This bubbly blend of genre tropes has spirit and whimsy.”
—Kirkus Reviews

“It has everything.”
—Book Riot