Gray & Blue: A Novel of the Civil War (Paperback) 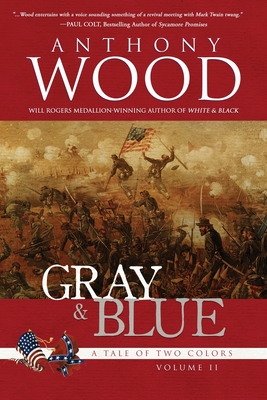 Gray & Blue: A Novel of the Civil War (Paperback)

He took an oath to fight. He just didn't realize it was for the wrong reasons.

Steaming South on the Mississippi River to enlist in the Confederate Army, Lummy Tullos leaves behind the life he always wanted. With little training and even less experience as a soldier, he joins the 27th Louisiana Volunteer Infantry to face the approaching Yankee juggernaut marching on Vicksburg. His singular purpose is to protect home and family from the blue invader.

Enduring heat, cold, horrific assaults, sickness, privation, and starvation through a forty-seven day siege, it is his comrades in the trenches-gray and blue alike-who give him hope... until tragedy strikes him to the core. With death at every turn and little prospect of ever seeing home again, he begins to question his commitment, his faith, and the nation for which he fights, suffers, and kills. How can he honor his oath to the Confederacy when he no longer believes in the cause it defends?

Lummy pushes forward until the battle for Vicksburg is lost. As he marches with his defeated army under the conquering Union flag, he comes to realize that the greatest surrender will be within.