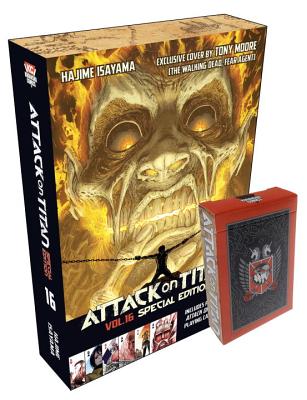 This is book number 1 in the Attack on Titan Special Edition series.

What's left of humanity lives in fear for their lives in this exciting, terrifying manga that's a number one bestseller in the U.S. and Japan. Humankind is down to just a few thousand people who live inside three concentric walls that protect them from the ravenous, giant Titans. The Titans appear to have only one purpose: to consume humanity.

This special edition will include full-color playing cards, each with a different piece of art from the manga series, printed by US Playing Card Company on the same stock and press as their world-famous Bicycle cards. It will also include an exclusive dust jacket with art by Tony Moore, co-creator of The Walking Dead!
With his debut series, Attack on Titan, Hajime Isayama has enjoyed a meteoric rise from unknown to one of Japan's top comics artists.