The Fighting Soul: On the Road with Bernie Sanders (Hardcover) 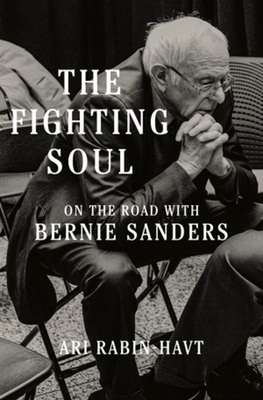 The Fighting Soul: On the Road with Bernie Sanders (Hardcover)

An unparalleled and intimate account of Bernie Sanders from one of his most trusted confidants.

Bernie Sanders inspires fervent love and, even among his enemies, a measure of grudging respect—yet, curiously, we know little about who the man really is, with Sanders deliberately keeping the focus on his policies.

Now, with The Fighting Soul, Ari Rabin-Havt takes us where no profiles or televised interviews have been able to go. As a close advisor and deputy campaign manager on Sanders’s most recent—and likely last—presidential campaign, the tireless Rabin-Havt spent more hours between 2017 and 2020 with the Vermont senator than anyone else. Traveling the country for rallies and to support striking workers, the two visited thirty-six states, drove tens of thousands of miles, and ate in countless chain restaurants. One result was a meteoric and galvanizing presidential campaign. Another is The Fighting Soul, an unforgettable chronicle of life on the road with Sanders and the first in-depth portrait of this fiercely independent, and famously private, left-wing firebrand.

Sanders’s second bid for the presidency began in Rabin-Havt’s apartment in Washington DC in January 2018. From there, Rabin-Havt offers a behind-the-scenes account of Sanders’s run, including his heart attack in Las Vegas, his notorious debate encounter with fellow-progressive Elizabeth Warren, and a momentous conversation between Sanders and Barack Obama that has never been reported before. At every step, Rabin-Havt shows us Bernie Sanders when the cameras turn off: his dry sense of humor; his views of his young supporters; the pivotal role his wife, Jane, plays in every decision he makes; and more. Delving into Sanders’s life and career, with moving glimpses of his childhood in Brooklyn and first forays into politics in Burlington, Rabin-Havt discloses that Sanders is shocked by his ascent: “Ari, my parents would tell me I was crazy if I told them I would become a senator, much less could become president of the United States.”

Though his campaign ended in abrupt and unexpected defeat, Sanders has pushed the Democratic Party to the left and helped remake American politics—as Rabin-Havt suggests, he has done more to shape our history than anyone else who has not reached the White House. Revelatory and heartfelt, The Fighting Soul depicts the rare politician motivated by principle, not power.

Ari Rabin-Havt served as deputy campaign manager on Senator Bernie Sanders’s 2020 presidential campaign and was a Sanders aide from 2017 to 2021. His writing has appeared in the New Republic and the Washington Post, among other publications, and he lives in Washington, DC.

Sanders is not well known on the granular level — his management style, tastes and quirks — in a way that is common for national politicians. Into that vacuum comes Ari Rabin-Havt’s engaging memoir of the 2020 Sanders campaign... Rabin-Havt, a former deputy campaign manager, offers an insider’s view.
— Janet Hook - New York Times Book Review

In The Fighting Soul: On the Road With Bernie Sanders, the former adviser offers an intimate portrait of his cranky boss, writing about everything from Sanders’s famous mittens, to his love of picket lines and Motown songs, to his distaste for ‘the inane droning of cable news commentators,’ to his prescient fear that Donald Trump was ‘nuts’ and would upend democracy.

The Fighting Soul by Ari Rabin-Havt is great — tons of detail about how the Bernie 2020 campaign worked, about what the media misses about campaigns, and about Sanders himself. Really smooth read, too.

The maverick socialist senator from Vermont flouts the norms of presidential politics in this rollicking campaign memoir . . . Rabin-Havt’s account of the Democratic primary race is breezy, colorful, and often insightful . . . the portrait of Sanders as a crusty but caring man, passionately committed to principles and the interests of working-class people, vividly shows why he is one of America’s most influential politicians.
— Publishers Weekly

Rabin-Havt describes, sometimes in humorous detail, the determined, principled persona that Sanders consistently embodied.... Offers insightful details of campaign rallies and 2020 primary debates and documents the drama and excitement of the Sanders campaign’s increasing success.... A thoughtful and comprehensive account of the Sanders 2020 campaign and an authoritative description of the candidate’s personality.
— Jill Ortner - Library Journal

Rabin-Havt delivers an admirable portrait of his candidate... Among the better campaign confessionals and just the thing for presidential-politics wonks.
— Kirkus Reviews