The Best Land Under Heaven: The Donner Party in the Age of Manifest Destiny (Paperback) 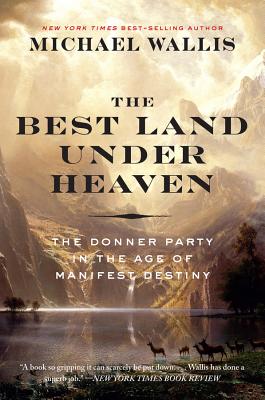 Longlisted for the Andrew Carnegie Medal for Excellence

Finalist for the Oklahoma Book Award

“A book so gripping it can scarcely be put down.... Superb.” —New York Times Book Review

"WESTWARD HO! FOR OREGON AND CALIFORNIA!"

In the eerily warm spring of 1846, George Donner placed this advertisement in a local newspaper as he and a restless caravan prepared for what they hoped would be the most rewarding journey of a lifetime. But in eagerly pursuing what would a century later become known as the "American dream," this optimistic-yet-motley crew of emigrants was met with a chilling nightmare; in the following months, their jingoistic excitement would be replaced by desperate cries for help that would fall silent in the deadly snow-covered mountains of the Sierra Nevada.

We know these early pioneers as the Donner Party, a name that has elicited horror since the late 1840s. With The Best Land Under Heaven, Wallis has penned what critics agree is “destined to become the standard account” (Washington Post) of the notorious saga. Cutting through 160 years of myth-making, the “expert storyteller” (True West) compellingly recounts how the unlikely band of early pioneers met their fate. Interweaving information from hundreds of newly uncovered documents, Wallis illuminates how a combination of greed and recklessness led to one of America’s most calamitous and sensationalized catastrophes. The result is a “fascinating, horrifying, and inspiring” (Oklahoman) examination of the darkest side of Manifest Destiny.

Michael Wallis, the best-selling author of Route 66 and Billy the Kid, has published eighteen books and won numerous honors and awards. He is a popular public speaker and a highly acclaimed voice actor. He lives in Tulsa, Oklahoma.