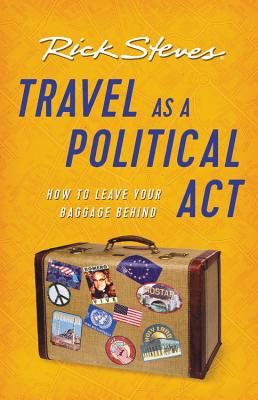 
On Our Shelves Now
Change the world one trip at a time. In this illuminating collection of stories and lessons from the road, acclaimed travel writer Rick Steves shares a powerful message that resonates now more than ever.

With the world facing divisive and often frightening events, from Trump, Brexit, and Erdogan, to climate change, nativism, and populism, there's never been a more important time to travel.

Rick believes the risks of travel are widely exaggerated, and that fear is for people who don't get out much. After years of living out of a suitcase, he still marvels at how different cultures find different truths to be self-evident. By sharing his experiences from Europe, Central America, Asia, and the Middle East, Rick shows how we can learn more about own country by viewing it from afar.

With gripping stories from Rick's decades of exploration, this fully revised edition of Travel as a Political Act is an antidote to the current climate of xenophobia. When we travel thoughtfully, we bring back the most beautiful souvenir of all: a broader perspective on the world that we all call home.

All royalties from the sale of Travel as a Political Act are donated to support the work of Bread for the World, a non-partisan organization working to end hunger at home and abroad.

Since 1973, Rick Steves has spent about four months a year exploring Europe. His mission: to empower Americans to have European trips that are fun, affordable, and culturally broadening. Rick produces a best-selling guidebook series, a public television series, and a public radio show, and organizes small-group tours that take over 30,000 travelers to Europe annually. He does all of this with the help of more than 100 well-traveled staff members at Rick Steves' Europe in Edmonds, WA (near Seattle). When not on the road, Rick is active in his church and with advocacy groups focused on economic and social justice, drug policy reform, and ending hunger. To recharge, Rick plays piano, relaxes at his family cabin in the Cascade Mountains, and spends time with his son Andy and daughter Jackie. Find out more about Rick at www.ricksteves.com and on Facebook.