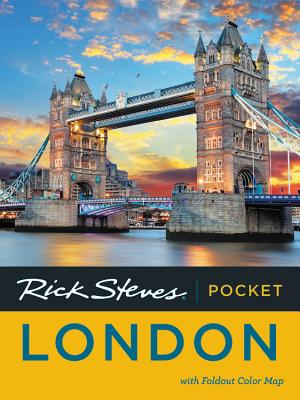 
Title unavailable, please email for information.
Rick Steves Pocket guidebooks truly are a "tour guide in your pocket." This colorful, compact 220-page book includes Rick's advice for prioritizing your time, whether you're spending 1 or 7 days in a city. Everything a busy traveler needs is easy to access: a neighborhood overview, city walks and tours, sights, handy food and accommodations charts, an appendix packed with information on trip planning and practicalities, and a fold-out city map.

Walks and Tours: the Westminster Walk, Westminster Abbey Tour, National Gallery Tour, West End Walk, British Museum Tour, British Library Tour, The City Walk, St. Paul's Cathedral Tour, and Tower of London Tour
Since 1973, Rick Steves has spent about four months a year exploring Europe. His mission: to empower Americans to have European trips that are fun, affordable, and culturally broadening. Rick produces a best-selling guidebook series, a public television series, and a public radio show, and organizes small-group tours that take over 30,000 travelers to Europe annually. He does all of this with the help of more than 100 well-traveled staff members at Rick Steves' Europe in Edmonds, WA (near Seattle). When not on the road, Rick is active in his church and with advocacy groups focused on economic and social justice, drug policy reform, and ending hunger. To recharge, Rick plays piano, relaxes at his family cabin in the Cascade Mountains, and spends time with his son Andy and daughter Jackie. Find out more about Rick at www.ricksteves.com and on Facebook.
Connect with Rick:
facebook.com/RickSteves
twitter: @RickSteves
instagram: ricksteveseurope