Save by Roy: Patrick Roy and the Return of the Colorado Avalanche (Paperback) 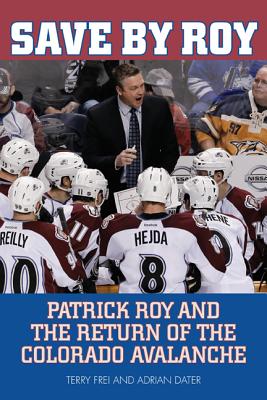 Save by Roy: Patrick Roy and the Return of the Colorado Avalanche (Paperback)


On Our Shelves Now
In 2013, the Colorado Avalanche announced that Joe Sakic, a franchise legend and Hall of Fame center, would be promoted to become the new executive VP of hockey operations. Soon, Sakic was instrumental in the hiring of Patrick Roy, the greatest goaltender in NHL history, a man crucial to the Avalanche's Stanley Cup victories in 1996 and 2001, as Colorado's new coach. This book, a collaborative effort between seasoned sportswriters and authors Terry Frei and Adrian Dater, is an opinionated, interpretive, and in-depth look at Patrick Roy's first season as a National Hockey League coach, and the Avalanche's surprising 2013-14 season.
Award-winning journalist, author, and screenwriter Terry Frei is in his second stint at the Denver Post. He has been a sports columnist for the Portland Oregonian, a football writer for the Sporting News, and an ESPN.com hockey columnist. Among his seven previous books are March 1939, Third Down and a War to Go, '77: Denver, the Broncos, and a Coming of Age, and Olympic Affair. His website is www.terryfrei.com. Adrian Dater is the author of several sports books, including Blood Feud: Detroit Red Wings vs. Colorado Avalanche and The Good, the Bad, and the Ugly: Denver Broncos. He lives in Thornton, Colorado.