Cover Story: The NBA and Modern Basketball as Told through Its Most Iconic Magazine Covers (Hardcover) 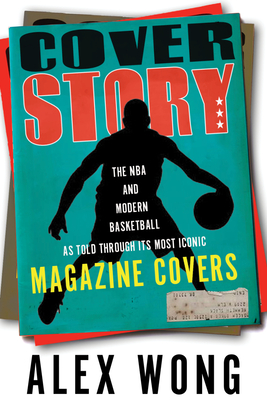 Cover Story: The NBA and Modern Basketball as Told through Its Most Iconic Magazine Covers (Hardcover)

A nostalgic romp through modern NBA history as documented by basketball's most iconic and innovative magazine covers.

Every magazine cover is the result of a series of intentional decisions. Cover Story shares the behind-the-scenes stories of these deliberate choices, which led to the most iconic basketball-related magazine covers during a period from 1984 to 2003.

Through 100-plus interviews conducted with writers, editors, publishers, photographers, creative directors, and the players themselves, the book explores Michael Jordan’s relationship with Sports Illustrated, Shaquille O’Neal and the hip-hop generation’s impact on newsstands, the birth of SLAM and the inside stories of their most iconic covers, how the 1996 USA women’s basketball team inspired a new era of women’s sports magazines, the competition among publishers to put high school phenom LeBron James on the magazine cover first, and much more.

Offering an immersive look at some of the most impactful moments in a golden era for modern basketball, this engaging read will appeal to basketball fans, pop culture enthusiasts, and those who want to take a deep dive into understanding how the individual components of a classic magazine cover come together.

Alex Wong is a freelance writer and author based in Toronto. He has written about basketball and culture for various publications including The New Yorker, GQ, SLAM, the New York Times, Yahoo Sports, and The Atlantic. He co-authored the Canadian bestseller We The Champs: The Toronto Raptors' Historic Run to the 2019 NBA Title. Russ Bengtson is a basketball and culture writer. He is the former Editor-In-Chief of SLAM.

“For every kid who turned SLAM magazine covers into posters, this book is for you. Well-researched, nostalgic, and a necessary modern collection of basketball’s most iconic magazine covers for a glorious trip down memory lane.” —DRAKECEREAL, artist

“I vividly remember spending hours at the bookstore or supermarket, looking at the covers of Sports Illustrated, SLAM, and all the other classic magazines of that era, hoping to find the next big thing. Cover Story instantly transports you back to the magazine aisle, where a sick glossy photo and some bold text could change the world. Or at least have you believing in the New Jersey Nets.” —TREY KERBY, No Dunks podcast co-host

"Along the way, the covers of magazines like Sports Illustrated and SLAM became not only announcements of stars’ arrivals, but also invitations to form more intimate bonds with them—an open door to a new kind of relationship with sports. Cover Story is Alex Wong’s love letter to that door: to the covers he taped on his walls, to the images and words emblazoned on his brain and heart, to the people who created them, and to the journey they led him on. It’s worth your attention." —Dan Devine, The Ringer

“With this elegiac portrait of the Golden Age of sports magazines, Cover Story ingeniously wrings new life out of the athletic heroes of our past. Delving deeply into the construction of the symbols, narratives, and images long seared into our collective memory, Alex Wong allows us to see beyond the Gods themselves and understand how the myths were actually created.” —JEFF WEISS, music journalist and founder of Passion of the Weiss