By the Grace of the Game: The Holocaust, a Basketball Legacy, and an Unprecedented American Dream (Hardcover) 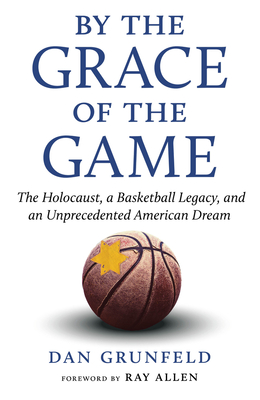 By the Grace of the Game: The Holocaust, a Basketball Legacy, and an Unprecedented American Dream (Hardcover)


On Our Shelves Now
When Lily and Alex entered a packed gymnasium in Queens, New York in 1972, they barely recognized their son. The boy who escaped to America with them, who was bullied as he struggled to learn English and cope with family tragedy, was now a young man who had discovered and secretly honed his basketball talent on the outdoor courts of New York City. That young man was Ernie Grunfeld, who would go on to win an Olympic gold medal and reach previously unimaginable heights as an NBA player and executive.

In By the Grace of the Game, Dan Grunfeld, once a basketball standout himself at Stanford University, shares the remarkable story of his family, a delicately interwoven narrative that doesn't lack in heartbreak yet remains as deeply nourishing as his grandmother's Hungarian cooking, so lovingly described. The true improbability of the saga lies in the discovery of a game that unknowingly held the power to heal wounds, build bridges, and tie together a fractured Jewish family. If the magnitude of an American dream is measured by the intensity of the nightmare that came before and the heights of the triumph achieved after, then By the Grace of the Game recounts an American dream story of unprecedented scale.

From the grips of the Nazis to the top of the Olympic podium, from the cheap seats to center stage at Madison Square Garden, from yellow stars to silver spoons, this complex tale traverses the spectrum of the human experience to detail how perseverance, love, and legacy can survive through generations, carried on the shoulders of a simple and beautiful game.
Dan Grunfeld was a two-time Academic All-American as a member of Stanford University's men's basketball team. He played eight professional seasons in top leagues around the world, including a year in Germany, three in Spain, and four in Israel, with a brief stint in the NBA for the New York Knicks. Grunfeld received his MBA from Stanford, and his writing has appeared in outlets including Sports Illustrated, Huffington Post,Jerusalem Post, and SBNation.

“Through a series of remarkable stories about his family and his own personal experiences, Dan Grunfeld shines a light on basketball’s unique ability to unite people of all backgrounds. Prepare to be moved and inspired by the powerful reflections he shares in this book.” —Adam Silver, NBA commissioner

“Ernie Grunfeld and I did special things together on the basketball court. I now know how truly extraordinary his journey was on and off the floor. This book is a profound and inspirational reminder of why you should never give up.” —Bernard King, Naismith Memorial Basketball Hall of Famer, four-time NBA All-Star


“Once I started to read this book, I couldn’t put it down. It’s a true story that showcases the best of America and the human spirit. I highly recommend this book.” —Wolf Blitzer, CNN anchor and host of The Situation Room

“Ernie is a hero to the Jewish community and basketball fans worldwide. I’m sure basketball saved Ernie in many ways, as it did for me. His legacy will always be about family and a will to succeed no matter what was in front of him.” —Nancy Lieberman, Naismith Memorial Basketball Hall of Famer, two-time college player of the year

“This story is the embodiment of the American Dream. It shows why we should never stop fighting and never give up.”  —Ray Allen, Naismith Memorial Basketball Hall of Famer, two-time NBA champion

"Multisensory descriptions, as of the pain of torn ligaments, the sound of fans yelling, and the all-encompassing delight of Grunfeld’s grandmother’s Hungarian food, help to make the prose beautiful and nuanced. Grunfeld weaves his Jewish heritage and linguistic understanding into the book with a strong grasp of historical context." —Foreword Reviews

"This heartfelt debut is a sincere reflection on the Jewish experience." —Booklist