Eddie Olczyk: Beating the Odds in Hockey and in Life (Paperback) 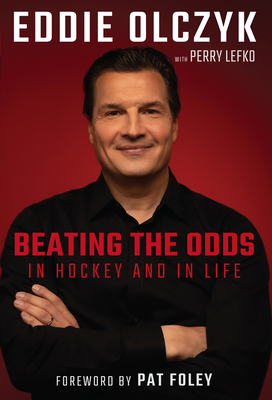 By Eddie Olczyk, Perry Lefko
$16.95
Available to Order - Usually Arrives in Our Store in 4 to 7 Days

When Eddie Olczyk looks at his life, he can't believe how many times he's beaten the odds. At age sixteen, he was selected for the 1984 U.S. Olympic hockey team, and four months after the competition ended he was drafted in the first round by his hometown Chicago Blackhawks. He played alongside Mario Lemieux and Mark Messier and saw his name engraved on the Stanley Cup. He's brought hockey into American homes as one of the most recognizable voices of the sport, and he's even become a respected analyst in the world of horse racing, thanks to his talent as a bettor—Olczyk once won more than $500,000 picking the winners of six consecutive races while wagering only $168.

But perhaps there is no greater example of Eddie O. beating the odds than in 2018 when he went into remission eight months after being diagnosed with Stage 3 colon cancer. He will readily admit that this was the greatest victory of his life. This memoir is an honest and emotional account of everything Olczyk has experienced: the sacrifices his parents made so he could pursue a career in the NHL, the joy of playing for the Hawks, the mental and physical stress involved in the life of a professional athlete, the incredible moments he's called from the broadcast booth, and the profound lessons learned while battling cancer.

Eddie Olczyk is an Emmy Award-winning television commentator for the NHL and horse racing. Perry Lefko is an award-winning Canadian journalist and bestselling author.