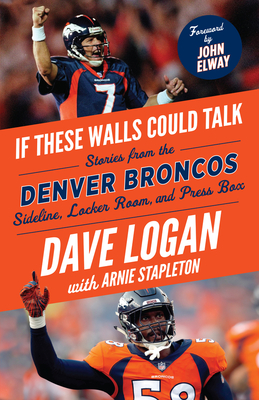 By Dave Logan, Arnie Stapleton, John Elway (Foreword by)
$17.95
On Our Shelves Now

The man on the mic for countless memorable moments from John Elway, Von Miller, Peyton Manning, and more, Dave Logan has lived and breathed Denver Broncos football as the team's longtime play-by-play announcer. In If These Walls Could Talk: Denver Broncos, Logan provides insight into the Broncos' inner sanctum as only he can.

Dave Logan has been the Voice of the Denver Broncos since 1990, beginning as a color analyst before shifting to play-by-play. Prior to his career in radio, he played nine NFL seasons, including for the Broncos in 1984.

Arnie Stapleton covers the NFL for AP. He is based in Denver.
John Elway spent his entire NFL playing career with the Denver Broncos, leading them to victory in Super Bowls XXXII and XXXIII. In 2011, he rejoined the Broncos as their general manager and executive vice president of football operations. He is the only person to win a Super Bowl as both a player and general manager.