If These Walls Could Talk: Philadelphia Flyers (Paperback) 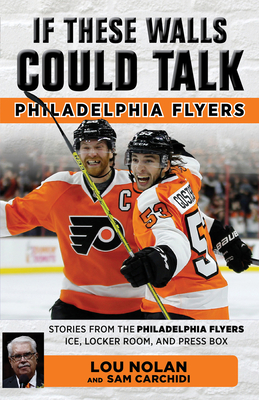 By Lou Nolan, Sam Carchidi, Bernie Parent (Foreword by)
$16.95
Available to Order - Usually Arrives in Our Store in 4 to 7 Days

From the days of Bobby Clarke, Bernie Parent, and the Broad Street Bullies, and up to the current era with stars like Claude Giroux and Shayne Gostisbehere, Lou Nolan has lived and breathed Flyers hockey as the team's longtime public address announcer. In If These Walls Could Talk: Philadelphia Flyers, Nolan provides insight into the Flyers' inner sanctum as only he can. Featuring conversations with players past and present as well as off-the-wall anecdotes only Nolan can tell, this is your rinkside ticket to some of the most memorable moments and characters in Philadelphia hockey history.

Lou Nolan is the Philadelphia Flyers' public address announcer, a position he has held since the 1972-73 season. He is also the senior vice president for Shay Financial Services. Nolan lives with his wife Ellen near Philadelphia and has two sons. This is his first book. Sam Carchidi has covered Sports for the Philadelphia Inquirer for over 40 years. In addition to working for the Inquirer, Sam has written for Athlon magazine, Baseball America, and the Scouting Report. He is the author of Miracle in the Making: The Adam Taliaferro Story, Bill Campbell: The Voice of Philadelphia Sports, and Standing Tall: The Kevin Everett Story. Goaltender Bernie Parent led the Philadelphia Flyers to Stanley Cups in 1974 and 1975, and he had shutouts in both of the clinching wins. In 1984, Parent became the first Flyer inducted into the Hockey Hall of Fame, and in 2017, as part of the NHL's 100th anniversary, he was selected as one of the top 100 players in the league's history.