Dreams from Many Rivers: A Hispanic History of the United States Told in Poems (Hardcover) 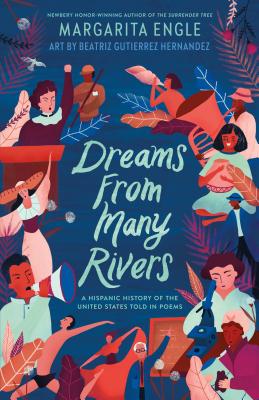 Dreams from Many Rivers: A Hispanic History of the United States Told in Poems (Hardcover)

From award-winning poet Margarita Engle comes Dreams from Many Rivers, an middle grade verse history of Latinos in the United States, told through many voices, and featuring illustrations by Beatriz Gutierrez Hernandez.

From Juana Briones and Juan Ponce de León, to eighteenth century slaves and modern-day sixth graders, the many and varied people depicted in this moving narrative speak to the experiences and contributions of Latinos throughout the history of the United States, from the earliest known stories up to present day. It's a portrait of a great, enormously varied, and enduring heritage. A compelling treatment of an important topic.

Margarita Engle is a Cuban American poet, novelist, and journalist whose work has been published in many countries. She is the author of young adult nonfiction books and novels in verse including The Surrender Tree, a Newbery Honor Book, The Poet Slave of Cuba, Hurricane Dancers, The Firefly Letters, and Tropical Secrets. She lives in northern California.

Beatriz Gutierrez Hernandez is an illustrator and animator born and raised in Guadalajara, Mexico and based in Brooklyn. She graduated from Pratt Institute with a BFA in Communications Design, with a focus in illustration.

"Ambitiously covering more than 500 years of history, Engle brings an imaginative and personal voice to an impressive variety of perspectives . . . the poems tell of resistance to colonialism, of the courage and anguish of indigenous lives that were changed forever by the arrival of the Spanish, of the incessant greed, and of resilience." —Booklist on Dreams from Many Rivers

"lifting unsung stories and centering Latinx perspectives . . . Engle makes a case for the necessity of bearing witness to both suffering and survival" —Publishers Weekly on Dreams from Many Rivers

"Engle addresses gaps in U.S. history for Latinxs, particularly topics that some may prefer omitted from cultural memory and the school curriculum." —School Library Journal on Dreams from Many Rivers