The Liars of Mariposa Island (Hardcover) 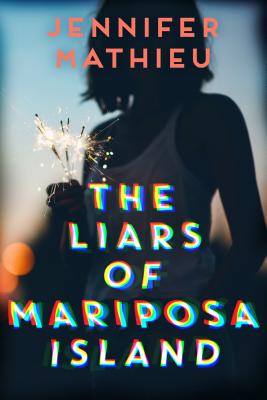 By Jennifer Mathieu
$17.99
Available to Order - Usually Arrives in Our Store in 4 to 7 Days

The Liars of Mariposa Island is a story that sticks true to the title: it’s a book of the lies that a family must tell to preserve the bonds between them. Told in three different perspectives, siblings Elena and Joaquin, as well as flashbacks to their mother’s early life as she fled the Cuban revolution, the plot is predominantly driven by the strong characters as the teenagers attempt to escape their mother’s choking control of their lives. With touches of romance, freshly uncovered family secrets, and a steady undercurrent of uneasiness, this is not only a captivating and powerful book, but is also beautifully written.

The Liars of Mariposa Island is a suspenseful book about a girl named Elena who lives life on an island with a manipulative mother who forces her to live in isolation from others. Elena and her brother Joaquin need to find a way to balance their relationships with others while tiptoeing around their mother’s anger. If you enjoy stories with intriguing character relationships and hidden motivations, you would love this book.

The Liars of Mariposa Island is set in both 1986, with some parts from as early as 1957. It is told in three perspectives: Joaquin, Elena, and their mother, Caridad. The first half of the book is told by Elena, the second by Joaquin, and Caridad's chapters are interspersed throughout. This book deals with how the Cuban revolution uprooted Caridad and turned her into the mother and person she is, along with Joaquin and Elena's teenage lives. Throughout the summer, the brother and sister explore the mystery of their father, romance, lies, and dealing with their mother on Mariposa Island. We learn about Caridad and how she was uprooted from a life of privilege in Cuba through the Pedro Pan project and never found happiness on Mariposa Island. This book was a good read, a solid novel. The writing was enjoyable and the characters were dynamic. The lies unearthed throughout the book were compelling and interesting. Fair warning, this book contains a lot of mentions of alcohol and drugs, and the age difference between Elena and her boyfriend was ah, four years. She's sixteen, he's twenty. It's not portrayed in a positive light; however, there is a pretty tame "fade to black" sex scene between them.

From the author of Moxie comes a stunning novel told in three voices about the lies families tell to survive.

Every year, summer begins when the Callahans arrive on Mariposa Island. That’s when Elena Finney gets to escape her unstable, controlling mother by babysitting for their two children. And the summer of 1986 promises to be extra special when she meets J.C., the new boy in town, whose kisses make Elena feel like she’s been transported to a new world.

Joaquin Finney can’t imagine why anyone would want to come to Mariposa Island. He just graduated from high school and dreams about going to California to find his father and escape his mother’s manipulation.

The Liars of Mariposa Island follows siblings Elena and Joaquin, with flashbacks to their mother's experience as a teenage refugee fleeing the Cuban revolution.

Jennifer Mathieu is the author of Devoted, Afterward, and The Truth About Alice, the winner of the Children's Choice Teen Debut Author Award. Her 2017 novel Moxie is being developed into a film directed by Amy Poehler for Netflix. Jennifer teaches high school English in Texas, where she lives in the Houston area with her husband and son.

“In The Liars of Mariposa Island, lies and truth swirl together in a dangerous undercurrent. Across two countries and three generations, Jennifer Mathieu masterfully explores how families break, how siblings survive, and all of the ways that love can hold us back and let us go.” —Robin Benway, National Book Award–winning and New York Times–bestselling author of Far from the Tree and Emmy & Oliver

“The Liars of Mariposa Island, with its richly layered exploration of the complicated love and lies that attend familial bonds, reasserts Jennifer Mathieu’s standing as one of young adult fiction’s most skilled storytellers.” —Jeff Zentner, Morris Award–winning author of The Serpent King and Goodbye Days

“In this tenderly told novel with a rich sense of place and time, Jennifer Mathieu unravels one immigrant family's secrets. Thanks to shifting narrative voices, readers grow in compassion for all three characters, flaws and all, and her masterful storytelling invites us to do the same.” —Mitali Perkins, author of You Bring the Distant Near

"Mathieu masterfully invests readers in the characters' origin stories, emotions, and motives. Her descriptions of the various settings over time and space are vivid and pulsating, immersing the audience in the psyches and nostalgia of each narrator." - Booklist, starred review

"Mathieu empathetically delves into thorny questions of identity, trauma, abuse, choices, family bonds, and the lengths people will go to keep a measure of control in their lives. With a touch of romance, this gentle, multilayered novel comes with a dash of the unexpected thanks to the deeply unreliable nature of its narrators." - Kirkus

"These stories intertwine and reflect one another with luminous intensity; Mathieu makes Caridad’s story as compelling and thorny as that of her children without sacrificing their centrality or letting her off the hook." - The Bulletin of the Center for Children's Books