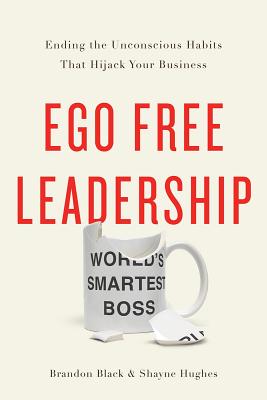 
Available to Order - Usually Arrives in Our Store in 4 to 7 Days
2017 Silver Nautilus Winner
2018 Indie Book Award Finalist
​
Take your ego out of the equation, and watch your company thrive
"I've got a solution," Encore's CFO tells Brandon, "but it's unorthodox." It's 2005 and Brandon Black has just been promoted to CEO of Encore Capital, a company struggling to navigate an increasingly difficult business environment. Faced with a rapidly declining stock price and low workplace morale, Brandon knows he needs change--and fast. Following his CFO's advice, he and his executive team start working with Learning as Leadership (LaL) and its president, Shayne Hughes. Through their partnership, Encore's executive team learns to root out the unproductive ego habits that undermine collaboration and performance.

As they instill these more effective behaviors throughout the organization, Encore begins to solve problems collectively, prioritize resources without infighting, and focus on the initiatives with the greatest strategic value. When the financial crisis of 2008-09 forces 90 percent of its competitors out of business, Encore thrives, with its profits increasing by 300 percent and its stock price by 1200 percent. Told from two lively first-person perspectives, Ego Free Leadership brings readers along for Encore's incredible success story. They'll see a CEO overcome his unconscious resistance to modeling the change he wants in his team and discover a time-tested roadmap for eliminating the destructive effects of the ego in teams and organizations.
Brandon Black Brandon Black retired as the chief executive officer and director of Encore Capital Group in 2013. During his nine years as president and chief executive officer, the Company built significant cost and operational advantages, expanded into new asset classes, and made acquisitions that established Encore as the industry's leading debt management and recovery solutions provider. In 2011, Encore started the Consumer Credit Research Institute, a groundbreaking effort to develop new knowledge about low- and moderate-income consumers using state-of-the-art research and fieldwork techniques. In addition, in 2013, the Great Places to Work Institute ranked Encore's subsidiary in Gurgaon, India as the 14th best organization in the entire country. Brandon earned an MBA from the University of Richmond and a bachelor's of business administration degree from The College of William and Mary. He is currently the president of the board for the Country Montessori School and the chairman of the board for Santa Fe Christian Schools. He also serves as a CASA (Court Appointed Special Advocate) for a foster youth.Shayne Hughes Shayne Hughes is president of Learning as Leadership, a culture change and leadership development firm serving the private and public sectors. His expertise in creating cultures of open communication and collaboration has led to substantial improvements in organizational and personal performance for such clients as Fairchild Semiconductor, NASA, Sandia National Laboratories, Shell Oil, and Capital One, among others. He is also experienced in the complex dynamics of family businesses. Mr. Hughes has taught leadership at the University of California Berkeley's Haas School of Business, the University of Michigan's Executive MBA Program, and the University of Virginia's Darden School of Business. He is a frequent keynote speaker at many conferences and corporate retreats. Fluent in French, Mr. Hughes earned his B.A. from the University of California Berkeley and completed graduate studies in group facilitation at the University of Tours in France. His writing has been published in Harvard's Du Bois Review, Diversity Executive magazine, Forbes.com, and Chief Executive magazine. He has been profiled in Psychology Today, and he blogs for the Huffington Post. Mr. Hughes also authored the coming-of-age memoir When the Running Began, in which he shares authentically how the pains of his past became infused with substance abuse and the coping strategies of his ego, and what it took to grow beyond them.