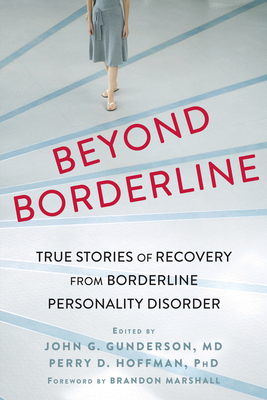 "These survivors hit their mark in helping to change the conversation about borderline personality disorder (BPD)."
--Jim Payne, former president of the National Alliance on Mental Illness

This provocative book uncovers the truth about a misunderstood and stigmatized disorder, and offers an opportunity for a deeper, more empathetic understanding of BPD from the real experts--the individuals living with it.

BPD affects a significant percentage of the population. It is a disorder of relationships, one whose symptoms occur most in interpersonal contexts--and thus impact any number of interpersonal connections in life. When people have BPD, they may struggle to manage their emotions on a daily basis, and have to deal with fears of abandonment, anger issues, self-injury, and even suicidality--all of which can lead to even more instability in relationships.

In Beyond Borderline, two internationally acclaimed experts on BPD--including Perry Hoffman, cofounder and president of the National Education Alliance for Borderline Personality Disorder (NEA-BPD)--team up to present a rare glimpse into the lives and recovery of people affected by BPD. This powerful compilation of stories reveals the deeply personal, firsthand perspectives of people who suffer with BPD, explores the numerous ways in which this disorder has affected their lives, and outlines the most debilitating and misunderstood symptoms of BPD (the most tragic being suicide). Beyond Borderline delves into the many ways the disorder can present--as well as the many paths to recovery--using evidence-based tools from dialectical behavior therapy (DBT), mindfulness meditation, mentalization-based therapy (MBT), and more.

BPD is a challenging disorder that impacts people's lives and relationships in countless ways. With this book--full of intimate accounts that reflect the myriad ways BPD presents and how it affects not just those afflicted, but also their loved ones--you'll gain a deeper understanding of the disorder and learn how to move forward on the path toward healing while dealing with BPD.


John G. Gunderson, MD, is professor of psychiatry at Harvard Medical School. At McLean Hospital, he is director of the Borderline Center's clinical, training, and research programs. Gunderson is widely recognized as the father of the borderline diagnosis. He is responsible for seminal research on the diagnosis, its course, its origins, and its treatment. These contributions have always been anchored within his role as a clinician whose practices are practical and compassionate. Perry D. Hoffman, PhD, is president and cofounder of the National Education Alliance for Borderline Personality Disorder (NEA-BPD). Hoffman has several grants from the National Institute of Mental Health (NIMH) with a focus on families. She has coordinated over sixty conferences on the disorder, and is codesigner of the twelve-week psychoeducation course, Family Connections(TM), available in seventeen countries. In 2011, the National Alliance on Mental Illness (NAMI) awarded Hoffman the Excellence in Community Mental Health Award. To find out more, visit www.borderlinepersonalitydisorder.com. Brandon Marshall is a three-time NFL Pro Bowler and All-Pro player. In 2006, he was drafted by the Denver Broncos, and in 2009, he set the all-time NFL record for receptions in a single game. In 2012, Brandon was traded to the Chicago Bears. Despite his success, Brandon felt controlled by his emotions. After years of ineffective therapy, he entered treatment at McLean Hospital, where he was finally diagnosed with borderline personality disorder (BPD), and learned the skills necessary to deal with his moods and emotions. He continues to use these tools today.