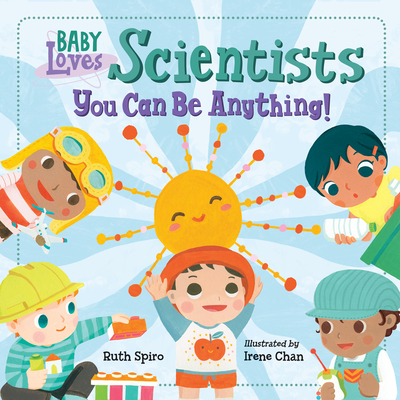 Babies who love science can be anything! Move over Wonder Woman and Superman--here come Aerospace Engineer and Particle Physicist! Now available in board book!

Baby loves to explore the world of science! What's next for Baby after learning about physics, engineering, computers, and the natural world? Becoming a scientist of course! In this fun look at several scientific careers, parents and children can talk about different science fields and the everyday heroes that work in them.

Beautiful, visually stimulating illustrations complement age-appropriate language to encourage baby's sense of wonder. Parents and caregivers may learn a thing or two as well.
Ruth Spiro is an award-winning children's book author and freelance writer whose articles, essays, and stories have appeared in magazines and anthologies. Her debut picture book, Lester Fizz, Bubble-Gum Artist (Dutton), won awards from Writer's Digest and Willamette Writers and was a Bank Street College of Education Best Book of the Year.

What do you want to be when you grow up?

If they haven’t already thought about their futures (and they probably haven’t), toddlers and preschoolers might start planning after perusing this cheerful first guide to scientific careers. Plump-cheeked, wide-eyed tykes with various skin and hair colors introduce different professions, including zoologist, meteorologist, aerospace engineer, and environmental scientist, depicted with cues to tip readers off to what the jobs entail. The simple text presents the sometimes-long, tongue-twisting career names while helpfully defining them in comprehensible terms. For example, an environmental scientist “helps take care of our world,” and a zoologist is defined as someone who “studies how animals behave.” Scientists in general are identified as those who “study, learn, and solve problems.” Such basic language not only benefits youngsters, but also offers adults sharing the book easy vocabulary with which to expand on conversations with kids about the professions. The title’s ebullient appearance is helped along by the typography: The jobs’ names are set in all caps, printed in color and in a larger font than the surrounding text, and emphasized with exclamation points. Additionally, the buoyant watercolors feature clues to what scientists in these fields work with, such as celestial bodies for astronomers. The youngest listeners won’t necessarily get all of this, but the book works as a rudimentary introduction to STEM topics and a shoutout to scientific endeavors.

So rocket science can be fun.
—Kirkus Reviews