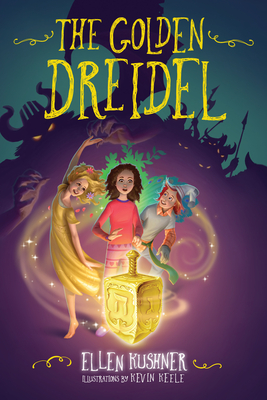 
On Our Shelves Now
From award-winning fantasy author Ellen Kushner comes an unforgettable adventure inspired by Jewish folklore and tradition.

Sara wishes her family celebrated Christmas or at least had one of the pretty trees she sees at her friends' houses. But at her family's big Chanukah party, mysterious guest Tante Miriam gives Sara a one-of-a-kind gift: an enormous, golden dreidel. Miriam warns her to be careful, for when she spins it, she's spinning miracles. Sara soon discovers there's much more to the dreidel than meets the eye, and before long she's spun herself into a whole new world--one of magical princesses, riddles, and demons. Can Sara discover her wisdom and rely on her courage to help a new friend and to find her way back home? The perfect Chanukah read!
Ellen Kushner is the author of several renowned fantasy novels for adults and children, including Swordspoint and The Golden Dreidel. A writer first, Ellen is also a former NPR radio host and teacher.

Kevin Keele is an award-winning professional illustrator and game designer.
♦ Sara is celebrating Chanukah with her family when a mysterious relative named Tante Miriam shows up with a special gift: a golden dreidel as big as a book! While everyone else is sleeping, the dreidel turns into a free-spirited girl with golden hair who guides Sara to a magical world through a portal in the television. When Sara arrives in the dreidel girl’s world, she witnesses her new friend being kidnapped by the Demon King and his army. Sara is determined to rescue her, and embarks on a quest to find the dreidel girl. Along the way, Sara meets a cast of characters inspired by Jewish folklore and Hebrew Bible tales, such as The Fool, a peacock, and the Queen of Sheba. While dozens of children’s Chanukah books exist, very few are tailored for chapter book readers. This magical middle grade Chanukah story, a Jewish spin on The Nutcracker, will delight not only fantasy readers, but those who enjoy witty humor and challenging riddles. Non-Jewish readers will also enjoy learning all about the significance and rules of how to play the popular Chanukah game of dreidel. Fans of fantasy classics like Coraline, Alice’s Adventures in Wonderland, and The Phantom Tollbooth will feel at home with The Golden Dreidel. VERDICT This has a modern appeal and is a worthy holiday purchase for chapter book readers.
—School Library Journal, starred review