Greenpeace: How a Group of Ecologists, Journalists, and Visionaries Changed the World (Paperback) 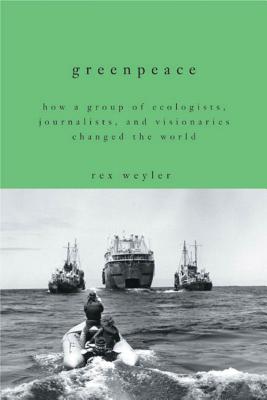 Greenpeace: How a Group of Ecologists, Journalists, and Visionaries Changed the World (Paperback)

Greenpeace: The Inside Story is the first comprehensive eye-witness account of the human drama behind the creation of the world's largest direct-action environmental group. Greenpeace founder and Pulitzer Prize-nominated author Rex Weyler brings us the amazing story of an idea that changed the world, and the adventures, clashes, pitfalls and heroics of the people who fought for it.

The book reveals the roots of ecology and the influence on Greenpeace of legends such as Gandhi, Einstein, Rachel Carson, and Martin Luther King Jr. The story is enhanced through cameo appearances by the CIA, Allen Ginsberg, Bonnie Raitt, Brigitte Bardot, James Taylor, Joni Mitchell, The Grateful Dead, Pope Paul VI, Courtney Love, and Richard Nixon.

Greenpeace has 4.5 million dues-paying members around the world, and many millions more supporters.

Rex Weyler was co- founder and director of the original Greenpeace Foundation from 1974-1979. His photographs and environmental essays have appeared in numerous magazines including the New York Times, Oceans, Smithsonian, Rolling Stone, New Age Journal, and National Geographic. Weyler received a Pulitzer Prize nomination for his native American history, Blood of the Land and co-authored the spiritual classic, Chop Wood, Carry Water.