From Parchment to Dust: The Case for Constitutional Skepticism (Hardcover) 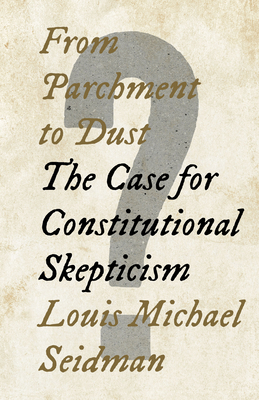 From Parchment to Dust: The Case for Constitutional Skepticism (Hardcover)

The prominent constitutional law scholar's fascinating (and yes, mind-boggling) argument that we don't need the Constitution after all

For some, to oppose the Constitution is to oppose the American experiment itself. But leading constitutional scholar Louis Michael Seidman argues that our founding document has long passed its "sell-by" date. It might sound crazy, but Seidman's arguments are both powerful and, well, convincing.

As Seidman shows, constitutional skepticism and disobedience have been present from the beginning of American history, even worming their way into the Federalist Papers. And, as Seidman also points out, no one alive today has agreed to be bound by these rules.

In From Parchment to Dust, Seidman offers a brief history of the phenomenon of constitutional skepticism and then proceeds to a masterful takedown of our most cherished, constitutionally enshrined institutions and beliefs, from the Supreme Court ("an arrogant elite in robes"), to the very concepts of civil rights, due process, and equal protection--all of which he argues are just pretenses for preserving a fundamentally rigged and inequitable status quo.

Rather than rely on the specific wording of a flawed and outdated document, rife with "Madison's mistakes," Seidman proposes instead a version that better reflects our shared values, and leaves it to people currently alive to determine how these values will play out in contemporary society.

From Parchment to Dust is a short, sharp, and iconoclastic book questioning the value (and ultimately the hypocrisy) of embracing the Constitution--which, after all, was written more than 230 years ago--as our moral and political lodestar.

Louis Michael Seidman is the Carmack Waterhouse Professor of Constitutional Law at Georgetown University, a former clerk for Thurgood Marshall, and a major proponent of the critical legal studies movement. He is the co-author of a case book on constitutional law and the author of several academic books on the Constitution. He lives in Washington, DC.