On the Job: The Untold Story of America's Work Centers and the New Fight for Wages, Dignity, and Health (Hardcover) 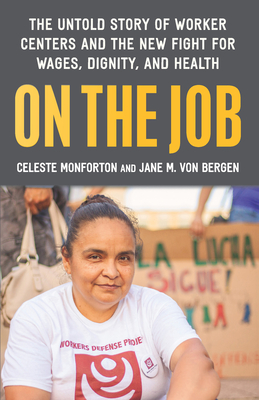 On the Job: The Untold Story of America's Work Centers and the New Fight for Wages, Dignity, and Health (Hardcover)

For over 60 million people, work in America has been a story of declining wages, insecurity, and unsafe conditions, especially amid the coronavirus epidemic. This new and troubling reality has galvanized media and policymakers, but all the while a different and little-known story of rebirth and struggle has percolated just below the surface.

On the Job is the first account of a new kind of labor movement, one that is happening locally, quietly, and among our country's most vulnerable--but essential--workers. Noted public health expert Celeste Monforton and award-winning journalist Jane M. Von Bergen crisscrossed the country, speaking with workers of all backgrounds and uncovering the stories of hundreds of new, worker-led organizations (often simply called worker centers) that have successfully achieved higher wages, safer working conditions and on-the-job dignity for their members.

On the Job describes ordinary people finding their voice and challenging power: from housekeepers in Chicago and Houston; to poultry workers in St. Cloud, Minnesota, and Springdale, Arkansas; and construction workers across the state of Texas. An inspiring book for dark times, On the Job reveals that labor activism is actually alive and growing--and holds the key to a different future for all working people.

Celeste Monforton is director of the Beyond OSHA Project and lecturer at Texas State University. A sought-after national media commentator, she lives in San Marcos, Texas. Jane M. Von Bergen is an award-winning reporter who covered labor for more than half of her thirty-five years at the Philadelphia Inquirer. She lives in Philadelphia.