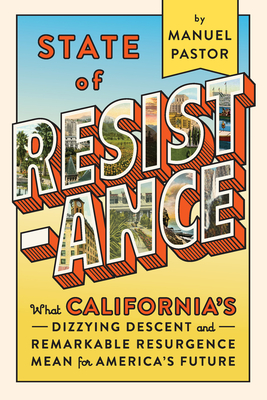 
Available to Order - Usually Arrives in Our Store in 4 to 7 Days
"Concise, clear and convincing. . . a vision for the country as a whole."
--James Fallows, The New York Times Book Review A leading sociologist's brilliant and revelatory argument that the future of politics, work, immigration, and more may be found in California

Once upon a time, any mention of California triggered unpleasant reminders of Ronald Reagan and right-wing tax revolts, ballot propositions targeting undocumented immigrants, and racist policing that sparked two of the nation's most devastating riots. In fact, California confronted many of the challenges the rest of the country faces now--decades before the rest of us.

Today, California is leading the way on addressing climate change, low-wage work, immigrant integration, overincarceration, and more. As white residents became a minority and job loss drove economic uncertainty, California had its own Trump moment twenty-five years ago, but has become increasingly blue over each of the last seven presidential elections. How did the Golden State manage to emerge from its unsavory past to become a bellwether for the rest of the country?

Thirty years after Mike Davis's hellish depiction of California in City of Quartz, the award-winning sociologist Manuel Pastor guides us through a new and improved California, complete with lessons that the nation should heed. Inspiring and expertly researched, State of Resistance makes the case for honestly engaging racial anxiety in order to address our true economic and generational challenges, a renewed commitment to public investments, the cultivation of social movements and community organizing, and more.

Dr. Manuel Pastor is a professor of sociology and American studies and ethnicity at the University of Southern California, where he also serves as director of the Program for Environmental and Regional Equity and co-director of USC's Center for the Study of Immigrant Integration. Dr. Pastor has received Guggenheim and Fulbright fellowships as well as the 2012 Wally Marks Changemaker of the Year award from the Liberty Hill Foundation in Los Angeles. He currently holds the Turpanjian Chair in Civil Society and Social Change at USC and lives in Los Angeles.