How Paris Became Paris: The Invention of the Modern City (Paperback) 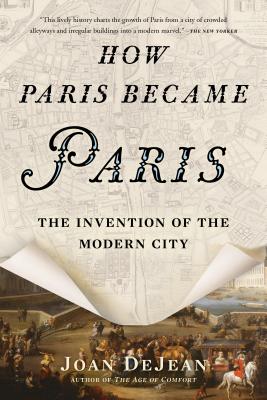 How Paris Became Paris: The Invention of the Modern City (Paperback)

At the beginning of the seventeenth century, Paris was known for isolated monuments but had not yet put its brand on urban space. Like other European cities, it was still emerging from its medieval past. But in a mere century Paris would be transformed into the modern and mythic city we know today.

Though most people associate the signature characteristics of Paris with the public works of the nineteenth century, Joan DeJean demonstrates that the Parisian model for urban space was in fact invented two centuries earlier, when the first complete design for the French capital was drawn up and implemented. As a result, Paris saw many changes. It became the first city to tear down its fortifications, inviting people in rather than keeping them out. Parisian urban planning showcased new kinds of streets, including the original boulevard, as well as public parks and the earliest sidewalks and bridges without houses. Venues opened for urban entertainment of all kinds, from opera and ballet to a pastime invented in Paris, recreational shopping. Parisians enjoyed the earliest public transportation and street lighting, and Paris became Europe's first great walking city.

A century of planned development made Paris both beautiful and exciting. It gave people reasons to be out in public as never before and as nowhere else. And it gave Paris its modern identity as a place that people dreamed of seeing. By 1700, Paris had become the capital that would revolutionize our conception of the city and of urban life.

Joan DeJean is Trustee Professor at the University of Pennsylvania. She is the author of ten books on French literature, history, and material culture, including most recently The Age of Comfort: When Paris Discovered Casual and the Modern Home Began and The Essence of Style: How the French Invented High Fashion, Fine Food, Chic Cafés, Style, Sophistication, and Glamour. She lives in Philadelphia and, when in Paris, on the street where the number 4 bus began service on July 5, 1662.

“This lively history charts the growth of Paris from a city of crowded alleyways and irregular buildings into a modern marvel.” —New Yorker

“The greatest strength of How Paris Became Paris is the richness of its subject matter. DeJean is fluent with the material and has conducted thorough research, with many interesting primary sources . . . Well worth reading.” —Washington Post

“DeJean's depth and scope of research are impressive . . . Like its subject, DeJean's biography of Paris emanates charm and wit. What makes [her] analysis so intriguing is her capacity to weave strands of history together. With such rich context, How Paris Became Paris is more than a history: It's the best kind of travel guidebook.” —BookPage

“Illuminating . . . Dejean obviously knows and loves Paris, and she provides coherent history that effectively explains the evolution of a city built by a few prescient men.” —starred review, Kirkus Reviews

“Witty and engaging . . . With panache and examples from primary sources, guidebooks, maps, and paintings, she illustrates how Paris changed people's conception of a city's potential.” —Publishers Weekly (Top Ten Travel Books this Spring)