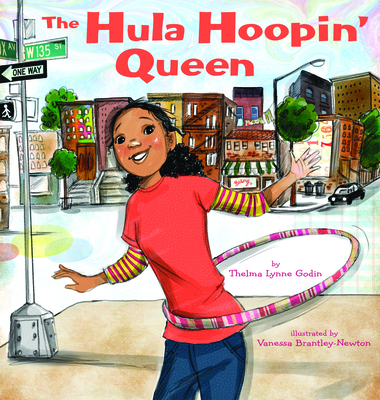 A spunky African American girl has a hula-hooping competition with her friends in Harlem, and soon everyone in the neighborhood--young and old alike--joins in on the fun.

Kameeka is confident that today she will finally beat her rival, Jamara, and become the Hula-Hoopin' Queen of 139th Street. But then Mama reminds her that today is their neighbor Miz Adeline's birthday, and Kameeka has a ton of chores to do to get ready for the party they are hosting.

Kameeka's disappointed to be stuck at home and can only think about the hoopin' competition. Distracted, Kameeka accidentally ruins Miz Adeline's birthday cake, and has to confess to her that there won't be a cake for her special day. But then Miz Adeline's confesses something too: she's also got the itch-the hula-hoopin' itch Her fingers start snappin'. Her hips start swingin'. Soon everyone's hips are swinging as the party spills out onto the street. The whole neighborhood's got the itch-the hula-hoopin' itch

A spunky African American girl has a hula-hooping competition with her friends in Harlem, and soon everyone in the neighborhood-young and old alike-joins in on the fun. With vibrant illustrations by Vanessa Brantley-Newton, The Hula-Hoopin' Queen is a charming celebration of family and community ties. Set in Harlem, this intergenerational story shows the importance of staying young at heart.

Thelma Lynne Godin grew up in upper Michigan climbing trees, ice skating in her backyard, and frequently visiting her small town library. She was inspired to write The Hula-Hoopin' Queen from her own experience of still going out to hoop with the kids in her neighborhood. Godin and her husband live in Sault Ste. Marie, Michigan. They have two grown children. The Hula-Hoopin' Queen is her picture book debut. Vanessa Brantley-Newton is a self-taught illustrator, doll maker, and crafter who studied fashion illustration at the Fashion Institute of Technology and children's book illustration at the School of Visual Arts in New York City. She has illustrated several picture books, two of which she also wrote. Brantley-Newton also loves to craft, cook, collect vintage children's books, tell stories, make dolls, and shop. She lives in East Orange, New Jersey, with her husband, daughter, and two crazy cats, Kirby and Stripes.