I Am a Promise (Hardcover) 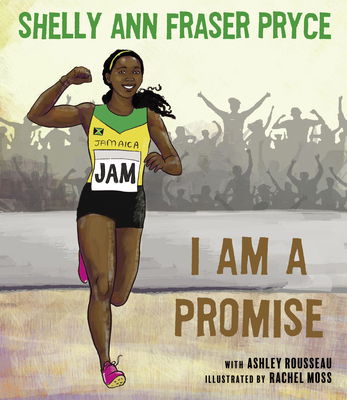 "Pryce, who earned her fame as an illustrious athlete before putting pen to paper, remains an influential voice for young men and women the world over...She lives the promise entrusted to her."
--Jamaica Gleaner

"I Am a Promise...takes readers on a journey from Shelly Ann Fraser Pryce's] childhood to the Olympics. It's her story about dreaming big and turning those dreams into reality."
--New York Amsterdam News

"This book, which offers material for the youngest readers and extends coverage of Jamaican track athletes beyond Usain Bolt, is a welcome addition to the sports biography bookshelf."
--Booklist

"Fraser Pryce, who grew up in Kingston, Jamaica, always loved to run. Her noticeable talent was present at an early age and was nurtured by many adults in her life. Her ability was her promise--to herself, to her family, to the people who supported her, and to the country that cheered her on as she represented Jamaica in the Olympics."
--School Library Journal

"Writing with Rousseau, Pryce offers a text that's accessible to new readers, repetition both underscoring her tirelessness and supporting decoding. Firmly outlined in black and opaquely colored, Moss' images complement this moving story while highlighting both Pryce's determination and the spirit of Jamaica, especially the support of a loving community (all depicted as black, like Pryce)...A solid addition to the early biography shelf."
--Kirkus Reviews

"Her grandmother tells her she is a promise but she doesn't understand why. As time goes on, she gets faster and begins to think of racing. Shelly Ann was the fastest woman in the world in 2012. She's a six-time Olympic medal winner. She learned she was a promise for Jamaica and the people who supported her. She also learned she was a promise to herself to do the best she can. That's a good lesson for all of us."
--Journey of a Bookseller

"Jamaica, stand up This...picture book is something to get excited about."
--Here We Read

I Am a Promise takes readers on Shelly Ann's journey from her childhood in the tough inner-city community of Waterhouse in Kingston, Jamaica, through her development as a young athlete, to her first Olympic gold medal in the 100-meter sprint in 2008.

The story charts how Shelly Ann's commitment to hard work as well as the encouragement of loved ones helped her achieve her dreams against great odds and challenging life experiences. Most importantly, I Am a Promise encourages young readers to believe in themselves and to maximize their own promise to the world.