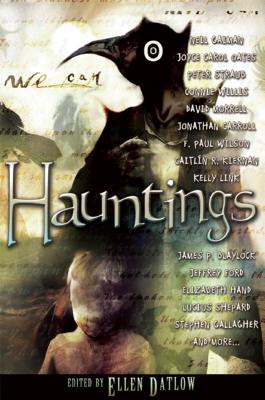 By Ellen Datlow (Editor)
Please email or write store for pricing and availability information.
Special Request - May Not Be Available

This fiendish anthology, complied by the horror genre's most acclaimed editor, drags you into the twisted minds of modern literary masters at their fiendish best. Visionary storytellers fill this collection of tales lyrical and strange, monstrous and exhilarating, horrific and transformative. *A sweetly vengeful voice on the radio calls a young soldier out to join a phantom patrol. *A hotel maid who threw her newborn child from a fourth-story window lingers in an interminable state. *An intern in a paranormal research facility delves deeply into the unexplained deaths of two staff members. *A serial killer plans his ultimate artistic achievement: the unveiling of an extremely special instrument in a very private concert. At once familiar and shocking, these riveting stories will haunt you long after you put down your book and turn out the light.

Ellen Datlow is one of the best-known editors of science fiction, fantasy, and horror working in the field today. She was the fiction editor of OMNI from 1981-1998 and has since edited the online magazines Event Horizon and Sci Fiction. Her many anthologies include Naked City; Snow White, Blood Red; Blood and Other Cravings; and Poe. Datlow has won five Hugo Awards, eight Locus Awards, three Bram Stoker Awards, two Shirley Jackson Awards, and nine World Fantasy Awards.

This anthology of 24 previously published dark fantasy and horror stories, edited by the ever-adept Datlow (Blood and Other Cravings), explores a variety of situations in which people encounter literal or figurative specters from beyond. Some feature the ghosts of lovers or spouses wronged, while others give readers a powerful lens through which to view the evil people can do here on Earth, as in the gut-wrenching Cargo’ by E. Michael Lewis. The theme is interpreted quite loosely and in varied ways, although many of the storiessuch as the atmospheric opener, Pat Cadigan’s Eenie, Meenie, Ipsateenie,’ and Adam L. G. Nevill’s tense Where Angels Come In’hinge on anxieties relating to children in peril. Even so, the collection flows smoothly, capturing the pleasantly shivery dread of a round of ghost stories told by a fire, with only a few hiccups or sour notes (the most sour being Richard Bowes’s deeply unpleasant Transfigured Night”). Solid entries by Neil Gaiman, Caitlín R. Kiernan, and Joyce Carol Oates capture the mood perfectly and will thrill fans of the eerie.”
Publishers Weekly

Datlow once again proves herself as a master editor. Her mission to broaden readers’ concepts of what a haunting can be is nothing short of a success, and the twenty-four stories on display run the gamut from explicitly terrifying to eerily familiar. Readers who wish to be haunted themselves should not miss this one. Highly recommended.”
Arkham Diges

That delicious sense of tantalization, of maybe and what if, impelled me through page after page, encountering intriguing characters, spine-shivering settings, and bits and pieces (sometimes literally...of corpses)....”
Hellnotes

A book that must surely be an early contender for any and every Best Anthology award going this year.”
Black Static

Twenty four tales in all spanning the years 1983 through 2012, Ms Datlow has assembled a formidable community of eminent genre artists working at the very heights of their literary powers to create this outstanding dark fantasy anthology. This is the best of the best--don’t miss it!”
The Tomb of Dark Delights