A Spider in the Cup (Hardcover) 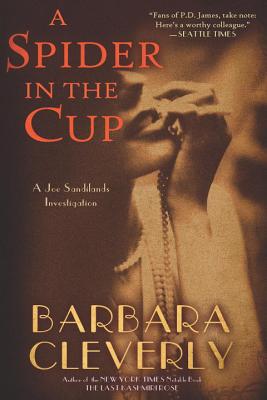 A Spider in the Cup (Hardcover)


Email or call for price. Handling fee may apply.
London, 1933: An amateur dowsing team searching the Thames for precious metals unearths the body of a young woman with a priceless coin in her mouth. The case falls on Scotland Yard Assistant Commissioner Joe Sandilands, but he has another, very high-profile assignment. London is hosting a massive economic conference to address the global Depression, and political tensions run high as world leaders stand either with or against a rapidly militarizing Germany. Sandilands is to protect visiting American senator Cornelius Kingstone throughout the conference. But a when a series of bizarre coincidences links the riverbank body to the senator, Joe realizes that Kingstone is caught up in a dangerous game that might cost not just one but thousands of lives.
Barbara Cleverly was born in the north of England and is a graduate of Durham University. A former teacher, she has spent her working life in Cambridgeshire and Suffolk; she now lives in Cambridge. She has one son and five stepchildren. She is the author of nine books, including "The Last Kashmiri Rose," "Strange Images of Death," "The Blood Royal," and "Not My Blood." Her Joe Sandilands series, set against the background of the Indian Empire, was inspired by the contents of a battered old tin trunk that she found in her attic.

Praise for A Spider in the Cup

"Intricate and intimate, Cleverly’s series melds the whodunit with the political thriller. “A Spider in the Cup” burnishes her bona fides as she once again pulls off a chilling and charming story with an engaging hero, a dose of leavening wit and a keen sense of history."
—Richmond Times-Dispatch

"A dangerous game set against a roiling historical backdrop."
—Bookpage

"Cleverly writes extremely well of the era that she is evoking.... [A Spider in the Cup] explores economic and political tensions of the times."
—Deadly Pleasures

"[A] suspenseful and intricate tale of honor and betrayal."
—Suspense Magazine

“A Spider in the Cup is an intriguing mix of history and murder mystery.... Another solid entry in this series, one definitely worth seeking out.”
—Mysterious Reviews

“Cleverly's strength is in her ability to pick readers up and place them in a different time and place through vivid descriptions of everything from the scenery to the sounds and aromas of the place.... The author pulls in readers [with] her marvelously colorful characters.”
—Reviewing the Evidence

"Stylish and intricate.... Cleverly has perfect pitch for period and place, whether her hero is unearthing evil in India, England or France."
—Richmond Times-Dispatch

"The appearance of a Joe Sandilands book is always welcomed by fans of this intelligent and gripping series."
—San Jose Mercury