A Brief History of Everyone Who Ever Lived: The Human Story Retold Through Our Genes (Hardcover) 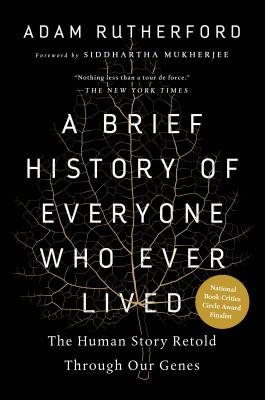 By Adam Rutherford, Siddhartha Mukherjee (Foreword by)
Please email or write store for pricing and availability information.
Out of Print

A National Geographic Best Book of 2017

In our unique genomes, every one of us carries the story of our species—births, deaths, disease, war, famine, migration, and a lot of sex.

But those stories have always been locked away—until now.

Who are our ancestors? Where did they come from? Geneticists have suddenly become historians, and the hard evidence in our DNA has blown the lid off what we thought we knew. Acclaimed science writer Adam Rutherford explains exactly how genomics is completely rewriting the human story—from 100,000 years ago to the present.

A Brief History of Everyone Who Ever Lived will upend your thinking on Neanderthals, evolution, royalty, race, and even redheads. (For example, we now know that at least four human species once roamed the earth.) Plus, here is the remarkable, controversial story of how our genes made their way to the Americas—one that’s still being written, as ever more of us have our DNA sequenced.

Rutherford closes with “A Short Introduction to the Future of Humankind,” filled with provocative questions that we’re on the cusp of answering: Are we still in the grasp of natural selection? Are we evolving for better or worse? And . . . where do we go from here?

Adam Rutherford is a science writer and broadcaster. He studied genetics at University College London, and during his PhD on the developing eye, he was part of a team that identified the first known genetic cause of a form of childhood blindness. As well as writing for the science pages of the Guardian, he has written and presented many award-winning series and programs for the BBC, including the flagship weekly Radio 4 program Inside Science, The Cell for BBC Four, and Playing God (on the rise of synthetic biology) for the leading science series Horizon. He is also the author of Humanimal, a new evolutionary history that explores the profound paradox of the “human animal”; A Brief History of Everyone Who Ever Lived, finalist for the National Book Critics Circle Award in nonfiction; and Creation, on the origin of life and synthetic biology, which was short-listed for the Wellcome Book Prize.

“A family portrait for all humanity . . . This enjoyable book has a great deal to say about our genetic code—or, more precisely, about how our knowledge of genetics is misused and misconstrued. . . . [Rutherford] proves an enthusiastic guide and a good storyteller.”—The Wall Street Journal

“An effervescent work, brimming with tales and confounding ideas carried in the ‘epic poem in our cells.’ ”—Guardian

“A sweeping new view of the human evolution story, using the latest science of DNA as the central guide . . . . Recommended.”—Scientific American

“A shining example of science writing at its best . . . will change the way you think about human evolution.”—Newsday

“One of my big obsessions as a reporter is our expanding understanding of our genetic history, thanks to incredible advances like sequencing Neanderthal genomes. Rutherford, a British geneticist and journalist, presents a great survey of this fast-moving field.”
— Carl Zimmer

“Genetics is opening up the past as never before—Adam Rutherford puts the genes in genealogy brilliantly.”
—Matt Ridley

“Adam Rutherford’s A Brief History of Everyone Who Ever Lived is the book we need.”
—PZ Myers

“[Rutherford’s] head-on, humane approach to such charged and misunderstood topics as intelligence and race make this an indispensable contribution to the popular science genre.”—Apple’s iBooks Best Book of September 2017

“Provides a good survey of the science of genomics and how it's changing the story of human evolution.”—Forbes

“An enthusiastic history of mankind in which DNA plays a far greater role than the traditional ‘bones and stones’ approach, followed by a hopeful if cautionary account of what the recent revolution in genomics foretells . . . Often quirky but thoughtful—solid popular science.”—Kirkus

“A Brief History of Everyone Who Ever Lived is equal parts informative, engaging, and frequently surprising—a must-read for fans of big-picture popular science.”
—Jennifer Ouellette, author of Me, Myself, and Why: Searching for the Science of Self

“A rollercoaster tour of human history and evolution . . . Rutherford is a bold, confident storyteller.”—Genome

“Rutherford is a gifted storyteller; he interweaves layperson’s genetics with the personal histories of scientists, explorers, and historical figures to create an extraordinarily readable book.”—Choice