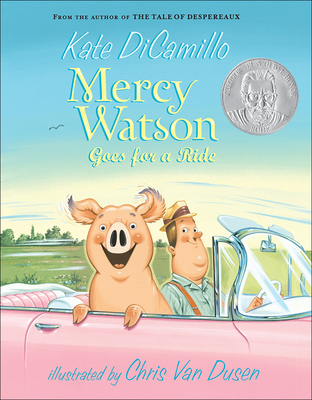 It's the best thing since buttered toast Mercy Watson in paperback "
"Mercy loves nothing more than a ride in the convertible, with the wind tickling her ears and the sun on her snout. But one day the Watsons elderly neighbor Baby Lincoln pops up in the backseat in hopes of some folly and adventure and in the chaos that ensues, an exuberant Mercy ends up behind the wheel
Kate DiCamillo is the author of THE TALE OF DESPEREAUX, which received the Newbery Medal; BECAUSE OF WINN-DIXIE, which received a Newbery Honor; and THE TIGER RISING, which was named a National Book Award Finalist. She says, "Mercy Watson had been in my head for a long time, but I couldn't figure out how to tell her story. One day, my friend Alison was going on and on and on about the many virtues of toast. As I listened to her, I could see Mercy nodding in emphatic agreement. Sometimes you don't truly understand a character until you know what she loves above all else."

Chris Van Dusen is the author-illustrator of DOWN TO THE SEA WITH MR. MAGEE, A CAMPING SPREE WITH MR. MAGEE, and IF I BUILT A CAR. He says, "When I first read Mercy Watson to the Rescue, the characters were very vivid in my mind, and they just came to life when I started painting. This is exactly the type of story I love to illustrate a wonderfully silly adventure with lots of action." This is his first book with Candlewick Press."