Vice Capades: Sex, Drugs, and Bowling from the Pilgrims to the Present (Hardcover) 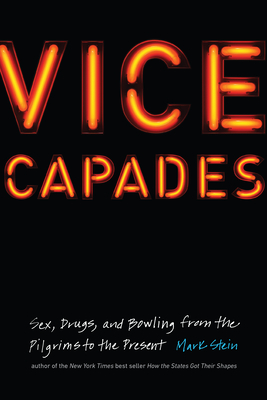 Vice Capades: Sex, Drugs, and Bowling from the Pilgrims to the Present (Hardcover)

From outlawing bowling in colonial America to regulating violent video games and synthetic drugs today, Mark Stein’s Vice Capades examines the nation’s relationship with the actions, attitudes, and antics that have defined morality. This humorous and quirky history reveals that our views of vice are formed not merely by morals but by power.


While laws against nude dancing have become less restrictive, laws restricting sexual harassment have been enacted. While marijuana is no longer illegal everywhere, restrictive laws have been enacted against cigarettes. Stein examines this nation’s inconsistent moral compass and how the powers-that-be in each era determine what is or is not deemed a vice. From the Puritans who founded Massachusetts with unyielding, biblically based laws to those modern purveyors of morality who currently campaign against video game violence, Vice Capades looks at the American history we all know from a fresh and exciting perspective and shows how vice has shaped our nation, sometimes without us even knowing it.

Mark Stein is an author, screenwriter, and playwright. He is the author of several books, including Vice Capades: Sex, Drugs, and Bowling from the Pilgrims to the Present (Potomac Books, 2017); How the States Got Their Shapes, a New York Times best seller and the basis for the eponymous History Channel series; and American Panic: A History of Who Scares Us and Why.

"In Vice Capades: Sex, Drugs, and Bowling from the Pilgrims to the Present author Mark Stein utilizes a humor-based approach to tracing the lengthy history of vice control in the United States."—Steven Block, Criminal Law and Criminal Justice Books

“Vice Capades exposes our racist and sexist history but reads like a Jon Stewart segment.”—Marianne Noble, author of The Masochistic Pleasures of Sentimental Literature


“Mark Stein once again shines brilliant light on who we really are as a nation and people.”—Mark Olshaker, coauthor of Mindhunter and Law and Disorder

“This is classic Mark Stein: funny and wise and full of verve. An erudite and fun read.”—Bob Davis, coauthor of Prosperity