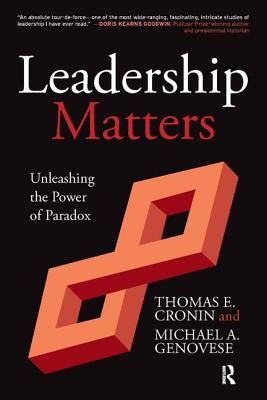 By Thomas E. Cronin, Michael a. Genovese
Please email or write store for pricing and availability information.
Available to Order - Usually Arrives in Our Store in 4 to 7 Days

Some leaders fundamentally alter the status quo whilst others guide quietly. Most leadership books emphasise specific rules, but Tom Cronin and Michael Genovese see leadership as filled with paradox. Leadership Matters offers a different view of leadership - one that builds community and responds creatively to new situations. Cronin and Genovese argue that leadership is about more than just charisma and set leaders on to a different path - to unleash the power of paradox.

Thomas E. Cronin is the McHugh Professor of American Institutions and Leadership at Colorado College. He is president emeritus of Whitman College (1993-2005) and a former acting president of Colorado College (1991). He earned a Ph.D. in political science from Stanford University, and is author, coauthor, or editor of a dozen books on politics and government. Cronin is a past president of both the Western Political Science Association and the Presidency Research Group and was honored by the American Political Science Association with the Charles E. Merriam Award recognizing outstanding contributions to the art of government. Michael A. Genovese is Director of the Institute for Leadership Studies and holds the Loyola Chair of Leadership as Professor of Political Science at Loyola Marymount University in Los Angeles. He received his PhD in political science from the University of Southern California and has authored over 30 books and edits a series on the presidency. Genovese has won numerous awards for outstanding teaching and scholarship.