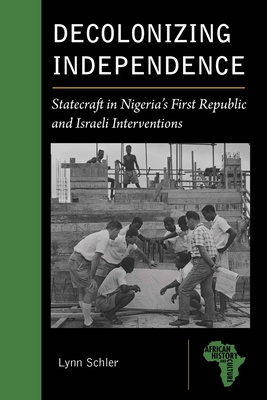 
Coming Soon - Available for Pre-Order Now
Even before it gained independence in 1960, the process of nation-building in Nigeria was plagued by regional, ethnic, and class conflict. Decolonizing Independence: Statecraft in Nigeria’s First Republic and Israeli Interventions examines how many of the leading figures of what would become Nigeria’s First Republic (1963–1966) formed relations with Israel to help navigate the challenges of statecraft and development. As Nigeria transitioned to independence, the dealings between its political elite and Israeli diplomats helped advance the ideological aspirations, economic ventures, development schemes, and political agendas that defined the era. Moving beyond the familiar history of Nigeria’s struggle with former colonizer Britain, Decolonizing Independence uses Israeli-Nigerian diplomatic relations to provide a novel window into the political cultures, ideologies, and leadership strategies that shaped statecraft in Nigeria. Tracing the events and dynamics that increasingly ensnared Israel in the smoldering political landscape of the First Republic, this volume sheds light on the postcolonial imaginaries of the Nigerian elite as they attempted to lead a divided nation through the process of decolonization.
LYNN SCHLER is a professor of African history in the Department of Politics and Government at Ben-Gurion University of the Negev, where she is also the head of the Inter-University Program for African Studies, the head of the MA Program in African Studies, and the director of the Tamar Golan Africa Centre.

“Relying largely on previously unexploited sources, especially in Israel, this is a well-informed, richly documented, and theoretically and conceptually grounded and nuanced analysis of Israeli relations with Nigerian regional power blocs in the 1950s and 1960s.”
—AYODEJI OLUKOJU, University Distinguished Professor of History, University of Lagos, Nigeria