Trump and a Post-Truth World (Paperback) 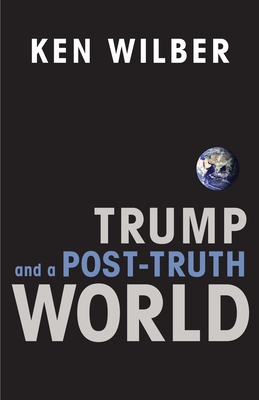 Trump and a Post-Truth World (Paperback)

The world is in turmoil. As populist waves roil in the UK, Europe, Turkey, Russia, Asia—and most visibly, the U.S., with the election of Donald Trump—nationalist and extremist political forces threaten the progress made over many decades. Democracies are reeling in the face of nihilism and narcissism. How did we get here? And how, with so much antagonism, cynicism, and discord, can we mend the ruptures in our societies?

In this provocative work, philosopher Ken Wilber applies his Integral approach to explain how we arrived where we are and why there is cause for hope.  He lays much of the blame on a failure at the progressive, leading edge of society. This leading edge is characterized by the desire to be as just and inclusive as possible, and to it we owe the thrust toward women’s rights, the civil rights movement, the environmental movement, and the concern for oppression in all its forms. This is all evolutionarily healthy. But what is unhealthy is a creeping postmodernism that is elitist, “politically correct,” insistent on an egalitarianism that is itself paradoxically hierarchical, and that looks down on “deplorables.” Combine this with the techno-economic demise of many traditional ways of making a living, and you get an explosive mixture. As Wilber says, for some Trump voters: “Everywhere you are told that you are fully equal and deserve immediate and complete empowerment, yet everywhere you are denied the means to actually achieve it. You suffocate, you suffer, and you get very, very mad.”

It is only when members of society’s leading edge can heal themselves that a new, Integral evolutionary force can emerge to move us beyond the social and political turmoil of our current time to offer genuine leadership toward greater wholeness.
Ken Wilber is the founder of Integral Institute and the cofounder of Integral Life. He is an internationally acknowledged leader and the preeminent scholar of the Integral stage of human development. He is the author of more than twenty books, including Integral Meditation, A Theory of Everything, Integral Spirituality, No Boundary, Grace and Grit, and Sex, Ecology, Spirituality.
“Ken Wilber examines Donald Trump’s election and provides a brilliant Big Picture explanation that is unique in its breadth, depth, and analysis of deeper cultural dynamics that others have overlooked but that we all need to now recognize.”—Roger Walsh MD, PhD, University of California